Workers in majority of U.S. states to see an increase in minimum wage in 2020

Many states across the country are just days away from implementing significant changes in the minimum wage, according to payroll experts Wolters Kluwer Legal & Regulatory U.S. With the clock ticking, a total of 26 states and the District of Columbia will raise the minimum wage in 2020, with 22 of those states implementing the increases by January 1. 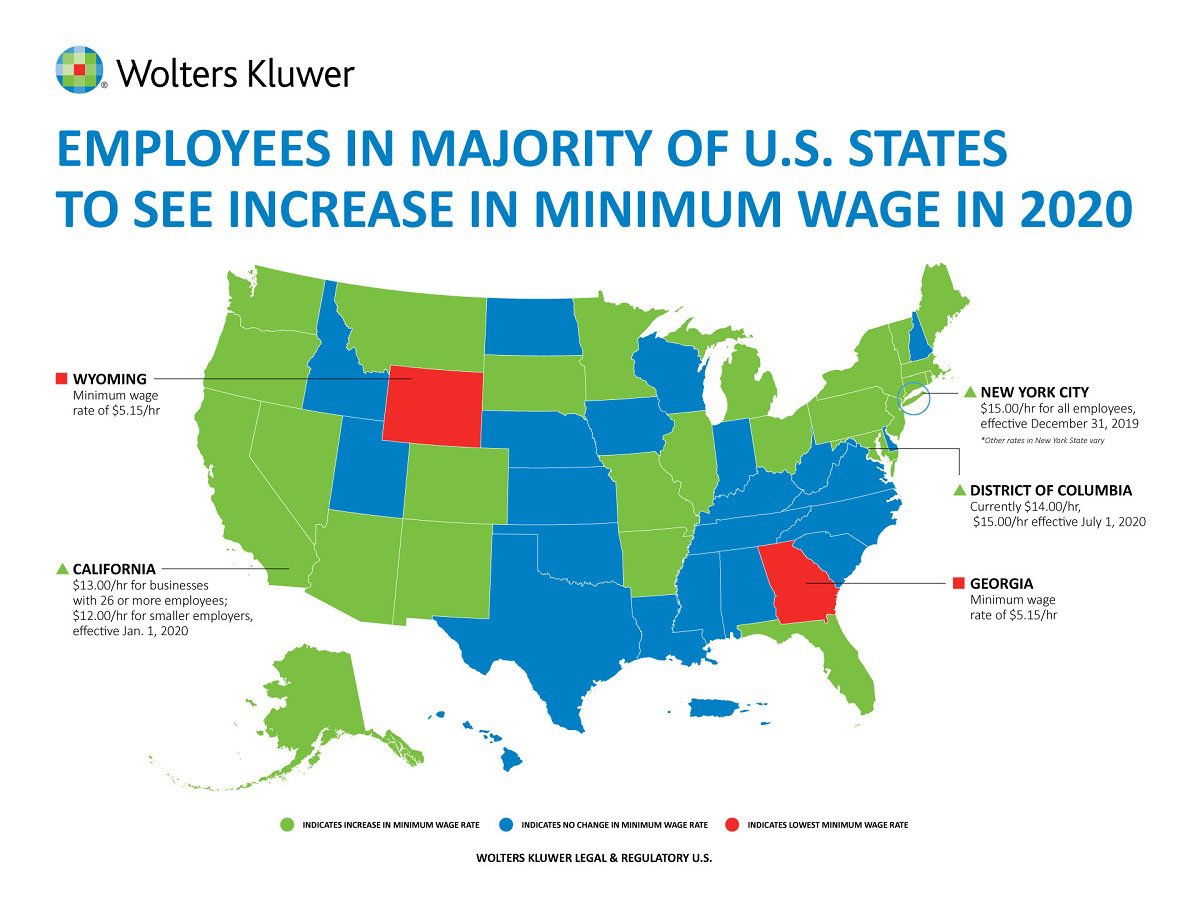 “The increases indicate a move toward ensuring a living wage for people across several states,” said Barbara O’Dell, JD, an Employment Law Analyst for Wolters Kluwer Legal & Regulatory U.S. “Some of the new rates are the result of previously approved incremental increases to reach a specific amount that is considered to be a living wage such as California, Colorado, Maine, Washington, whereas other states’ increases reflect an annual cost-of-living adjustment, such as Alaska, Florida, Minnesota, Montana.”

Those states following the step-up approach tend to have higher minimum wage rates than those taking a cost-of-living adjustment approach. The trend towards regional minimum wages, such as those in New York and Oregon, also reflect lawmakers’ recognition that costs of living are higher in large metro areas than they are in other parts of the state.

States that will be impacted in 2020

$10.19 per hour, up thirty cents from $9.89 per hour, based on a 3% increase in the cost of living. Wage rates are adjusted annually based on inflation. School bus drivers are to be paid two times the minimum wage.

$12 per hour, up from $11 per hour. In addition, employees are entitled to paid sick leave, at the rate of one hour of paid sick time for every 30 hours worked, but with limits based on the size of the employer.

$13.00 per hour, for businesses with 26 or more employees; $12.00 for smaller employers. On April 4, 2016, California Governor Edmund G. Brown Jr. signed legislation to gradually raise the state minimum wage with annual increases to reach $15 by 2022 for businesses with 26 or more employees and by 2023 for smaller employers. The plan also allows for the Governor to “pause” wage hikes, to be determined by September 1 of each year for the next year, if negative economic or budgetary conditions emerge.

$8.65 per hour, up 15 cents, based on a 1.75% change in the cost of living and rounded to the nearest 5 cents. Wage rates are adjusted annually based on inflation.

The minimum wage for workers in fast food establishments is $15 per hour in New York City and $13.75 per hour in the rest of the state.

The Department of Labor and Industries will resume calculating the minimum wage for calendar years 2021 and beyond, based on increases in the cost of living.
Workers under 16 years old can be paid 85 percent of the adult minimum wage, or $11.48 per hour, in 2020.

The initiative also guarantees paid sick time to workers, allowing workers to accrue one hour of paid sick leave for every 40 hours worked.

*The above excludes minimum wage rates in Seattle.

For members of the media interested in additional detail on minimum wage rates or an interview with a payroll expert from Wolters Kluwer Legal & Regulatory U.S., please contact us at [email protected].

Wolters Kluwer is a global leader in professional information, software solutions, and services for the healthcare; tax and accounting; governance, risk and compliance; and legal and regulatory sectors. Wolters Kluwer helps its customers make critical decisions every day by providing expert solutions that combine deep domain knowledge with advanced technology and services.

Wolters Kluwer reported 2018 annual revenues of €4.3 billion. The group serves customers in over 180 countries, maintains operations in over 40 countries, and employs approximately 19,000 people worldwide. The company is headquartered in Alphen aan den Rijn, the Netherlands.