Keeping up with the times: The importance of Evidence-Based Practice

Why Evidence-Based Practice (EBP)? The benefits of implementing the latest clinical evidence in today's fast-paced, increasingly complex hospitals are overwhelming. 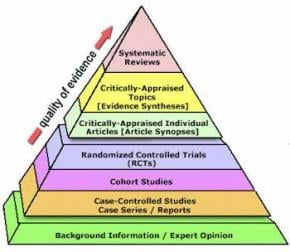 The benefits of implementing the latest clinical evidence is overwhelming for hospitals. With an increased focus on value-based reimbursements from the Affordable Care Act, noted EBP expert Dr. Bernadette Melnyk estimates that the U.S. healthcare system could reduce its healthcare spending by a whopping 30% if all patients received evidence-based healthcare.

“During one of my clinical rotations, a seasoned nurse corrected me for not aspirating a syringe during an intramuscular injection," he wrote. But “current evidence-based research suggests that aspirating intramuscularly is no longer a standard of practice since no evidence supports its practice and it can cause trauma to patients."

Salinas doesn't go into the specifics of how he resolved the issue. (One hopes he respectfully cited the evidence, the nurse conceded, and the two followed up on the matter later - looking at the published evidence in greater depth and going on to educate other unit nurses accordingly.) The scenario does demonstrate, however, that when it comes to the latest in evidence-based practice, even the most experienced and trusted nurses may have something new to learn.

Out with the old theories

“There was a time when milking chest tubes and bathing children in alcohol were standard practices," Salinas observes. “Although at the time the nursing interventions may have seemed rational, evidence-based practice has proven otherwise."

Here are a few more examples Salinas provides of once-typical nursing practices that have been abandoned after evidence emerged and supported better ways:

Here's what current evidence advises on such matters:

In with the new evidence-based practice

Just to be clear, the blog post communicates no disrespect to more experienced nurses or nursing practice from years' past. Rather, Salinas uses the platform to exhort nursing students and newer nurses to recognize, respect and reinforce evidence-based practice in the clinical settings they find themselves in.

“Evidence-based practice replaces policies and procedures based on other sources of evidence such as tradition or authority," he writes. “It takes into account three things nursing students should consider at all times: best practice evidence, patient preferences and clinical expertise."

His essay is a timely reminder of the importance of evidence-based practice in today's fast-moving, increasingly complex healthcare environment.

“The evidence-based interventions we learn can improve patient outcomes, help to provide high quality care, reduce costs and eliminate practices that have become obsolete or are not effective," he explains.

In the end, his words are just as appropriate for current nurses as they are for future nurses in all types of health care environments.

“Gaining knowledge of evidence-based practice and learning strategies for implementation are critical skills for nurses," he writes, “no matter the setting."

To learn more about this topic, download our free white paper, “Evidence-Based Practice in Nursing Education: The Nuts and Bolts of Integration,” by Kathleen Williamson, Chair and Associate Professor at Midwestern State University's Wilson School of Nursing.