Dissolving, winding up, and terminating a limited liability company

Limited liability companies (LLCs) have a lifecycle. They’re formed, they do business, and they terminate. And while it’s true that LLCs have a right to exist forever—an entity characteristic known as perpetual duration—the fact is, most will one day terminate.

Ending an LLC’s existence as a separate legal entity is a multi-step process that involves dissolving, winding up affairs, liquidating assets, paying creditors, and more. This process requires compliance with both the formation state’s LLC Act and the LLC’s operating agreement. Many operating agreements set forth when and how an LLC will dissolve, wind up, liquidate, and distribute its remaining assets to its members. If not, the statute’s default provisions have to be followed. In addition, the statutes have some requirements that must be complied with that cannot be altered by the operating agreement. 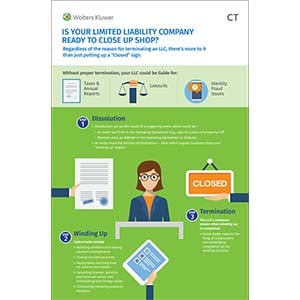 Is Your Limited Liability Company Ready to Close Up Shop?
Regardless of the reason for terminating an LLC, there's more to it than just putting up a "Closed" sign.
Download the Infographic

Dissolution: The beginning of the end, not the end itself

What it is and what it isn’t. Dissolution is the first step in the termination process is to dissolve the LLC. Although some people confuse dissolution and termination, dissolution does not terminate an LLC’s existence. What it does is change the purpose of its existence. Instead of conducting whatever business it conducted before, a dissolved LLC exists solely for the purpose of winding up and liquidating.

CT note: While this article is addressing voluntary dissolution and termination, it may be noted that the LLC statutes also provide for administrative dissolution for LLCs that fail to comply with certain compliance requirements and for judicial dissolution under certain circumstances.

Member vote. In most cases, an LLC's dissolution is triggered by a vote of the members. Before a vote is taken, it is important to read the operating agreement. It may set forth the number or percentage of members who have to approve dissolution. It may also require a meeting to be held, notice to be given, and other formalities.

If the operating agreement doesn’t deal with these issues then the default provisions of the formation state's LLC Act govern. State laws vary. For example, some require a unanimous vote for dissolution, while others require a two-thirds or majority vote. In some states, the votes are based on the number of members, some on the percentage of ownership interests. And there are some state LLC laws without default formality requirements.

Filing a document. Many states require the filing of a document after the event of dissolution. Generally called articles of dissolution, it usually states the LLC’s name, the date it was formed, the fact the LLC is dissolving, and the event triggering the dissolution. Upon the effective date of this document, the LLC is considered dissolved and must stop doing its regular business and start winding up.

Winding up: Necessary, but not simple

What the statutes say. Once the LLC is dissolved, the members must begin winding up its affairs. The LLC statutes broadly describe what has to be done. There are three main tasks:

What typically has to be done. Winding up is not simple. There are many things to do, and they will differ for each particular LLC. However, they often include the following:

Paying taxes. Part of the winding up process is paying taxes. No state will allow an LLC’s existence to terminate before it has paid its state taxes. Some states require proof that taxes have been paid. This is generally called a tax clearance requirement. Upon request, the state tax department issues a document stating that no taxes are due. This document then has to be filed with the secretary of state (or other business entity filing office).

And then what? The final step is to distribute any remaining assets to the members. Check the operating agreement. It may set forth who gets what.

Termination: All that must be done has been done

Once all the steps in the winding up process are completed, the existence of the entity is terminated.

Some states require a document to be filed when the winding up is done. This document may be called articles of termination, articles of cancellation, or a similar name. In it, the LLC has to state that all debts and liabilities have been paid or provided for and any remaining assets distributed.

As you can see, terminating the existence of an LLC can be a complex process. However, an LLC that is going out of business should formally terminate. As long as it still exists as an entity it continues to be liable for taxes and annual reports, it can be sued, and there is even a risk of having its identity stolen.

Is Your Limited Liability Company Ready to Close Up Shop?
Download the Infographic

Sandra Feldman
Publications Attorney
Sandra (Sandy) Feldman has been with CT Corporation since 1985 and has been the Publications Attorney since 1988. Sandy stays on top of the most pressing and pertinent business entity law issues that impact CT customers of all sizes and segments.
Explore related topics
Effective decision makingDissolution and WithdrawalLimited Liability Company (LLC)
Business dissolution & withdrawal

What should a company do when it stops doing business in a foreign state The year in review: Our top articles of 2021 How to start a tow truck business