Welcome to the 6th article in a series intended to generate discussion amongst H&S risk professionals and managers about improvements to the site Operational Risk Management (ORM) thinking and methods.

The content should also help ORM personnel ‘influence’ line management at all levels.

The term, ‘influence’, has been deliberately selected to highlight the need for line management commitment and involvement in the change to Control Based Risk Management (CBRM) and, possibly, Critical Control Management (CCM). Ownership for the changes to more advanced mining ORM must overtly involve line management, as opposed to being seen as an initiative from the H&S department.

This article will discuss the use of Journey Models to plan for change and to influence line management understanding and to gain overt line involvement in the changes.

Journey models are common across many disciplines for illustrating the steps in a change as well as to assist in planning. The illustration below shows the basic journey for a retail customer sourced from Zenith Media (zenithmedia.ch/en/news/?id=81). The customer proceeds through the 4 steps, unlikely to take “Action’ without successful completion of the previous 3 steps.

Once we have the attention of line managers, unfortunately often following a significant unwanted event, there may be interest in understanding potential improvements such as CBRM or CCM. The step from interest to desire for the CBRM or CCM ‘product’, or the motivation for the commitment of line management, is a watershed or tipping point of this journey.

It is likely that line management desire for a significant change will require recognition that there is a need for change, as well as an image of what the change involves. Major changes like CBRM or CCM require moderate to long-term planning and, as such, need a very effective argument to get line desire for and commitment to the change. A different, ORM specific, journey model may help the process.

Many of us are familiar with the journey model below that is part of the Hearts and Minds programme developed by Shell with the assistance of Professor Patrick Hudson. This journey model illustrates the levels of overall H&S maturity from Pathological to Generative. It can help line management understand the steps and some of their implications. 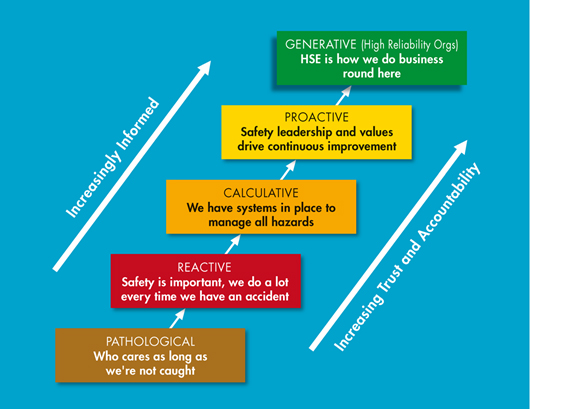 If descriptors for each of the journey steps are added, the model can become a planning tool. That tool can be used to identify the site’s current status and the next step in H&S maturity. Some companies suggest that a journey model provides a map; where am I, where do I want to be, how do I get there.

The value of this approach to gain line management desire for the change, and thereby overt commitment to action, becomes even more significant when considering that movement up the maturity steps will take years of effort. The model provides the rationale for a multi-year plan that can capture the background for new line managers that were not involved in the original planning. Thereby, minimising the risk of deviating from a well-developed plan.

This model can also be used as a map to help line management identify the current site ORM location, the next step on the journey and actions required to move forward. Detailed descriptors for several sub-elements of each step can be found in two sources, suitable for a mapping exercise. There is a one-page outline of related mindset and ORM method elements in the Appendix of the 2015 ICMM publication, ‘Health and safety-critical control management: good practice guidance’, as well as a more detailed set of descriptors for the same elements in a 2015 ACARP report, C24006 ‘Effective and efficient implementation of Critical Control Management in the Australian coal mining industry by 2020’.

The need to consider mindsets of leaders and the workforce, as well as risk management methods, when moving to CBRM and CCM, has been suggested in previous series articles. The tools suggested in the references cover both mindsets and methods.

Undertaking a detailed ORM journey mapping exercise with line management may help the transition from interest to desire for CBRM or CCM improvements. However, the exercise and related discussions may also generate some classic failure modes. Following are a few examples.

Comfort with the status quo

The motivation to consider a major change in ORM methods is often driven by poor H&S performance; whether it be a single major unwanted event or cumulative outcomes. Interest in CBRM or CCM can also be driven by company interactions with peers. When surveyed, the majority of ICMM and ACARP members stated their interest in moving to CCM, possibly because it was defined by the mining industry itself and not externally by suppliers or stakeholders.

As such, ‘comfort with the status quo’ is not a common issue at the mining executive level but rather more frequently encountered at middle management levels and sometimes with H&S personnel. Of course, perceptions related to added workload may generate resistance to change but sometimes resistance results from an inaccurate image of the effectiveness of current ORM messages and methods.

This failure mode suggests that site-level personnel should recognise CBRM or CCM as a replacement rather than an addition to current messages and methods. For example, as discussed in an earlier series article, initial actions should include reviewing current ORM messages and methods for their value and control focus. As a result, ORM related workload can be reduced and remaining methods improved.

As mentioned, CCM is commonly seen as the ORM improvement goal in the mining industry. While that goal may be desirable the magnitude of change to achieve successful CCM should be recognised.

Different mining companies and mine sites, even within companies, have varying quality of current ORM mindsets and methods. A short-term change to successful CCM may be unachievable in some cases. Sites that adopt CCM and define the ‘critical few’ controls without good quality overall control strategies risk over-simplifying their ORM, possibly leading to disaster.

The above ORM journey model was developed to help plan and manage for the pace of change so that important required steps in mindset and method enhancement are achieved through a planned transition. The next series article will discuss the need to have effective CBRM before moving to CCM. This appears to an important consideration for those who may be moving too quickly to CCM.

Failure to appreciate the magnitude of change and potential cost

Executives and line management can underestimate the amount of work required to move forward on the ORM journey.

For example, Bowtie Analysis (BTA) exercises are commonly undertaken on the highest priority unwanted events as part of CBRM. BTA-based identification of controls is intended to define an effective overall control strategy for a priority unwanted event. Control effectiveness should be challenged as part of the analysis, possibly by examining factors that can erode or compromise the control to address effectiveness issues. Improving the effectiveness of existing controls or adding new controls to achieve a more effective overall control strategy is a potentially costly outcome of a quality BTA.

Discussion about important controls that are human acts, sometimes known as ‘soft controls’, may lead to recommendations about adding more effective object controls (hard controls) or technological systems (a combination of soft and hard). (Note that previous articles discussed the definition of controls as acts, objects, and technological systems.) Of course, risk benefit consideration may be needed but often identified new ‘hard controls’ are cost effective. Also, verification requirements may lead to investment in time and technology for gathering useful control status information. Line management should be aware that these possible control improvement outcomes and be prepared for workload and cost implications.

A future series article will discuss establishing the risk acceptability based on control effectiveness. This approach may also generate business case information for the suggested control improvements.

Failure to understand the time frame and its implications

Changes in leader and workforce mindsets must run parallel to changes in ORM methods. It is often easier and faster to develop and introduce new ORM messages and methods than to change mindsets.

Achieving the desired workforce, supervisor and management mindsets about controls, CBRM or CCM will take time. A mindset is “a person’s way of thinking and their opinions” according to the Cambridge online dictionary. Mindsets are part of the initial journey model in this article that basically covers customer purchase of a new product, or, as suggested, line management buy-in to changes. There are many aspects to CBRM and CCM that will require attention, interest, desire, and action. Social marketing experts might suggest that following action there must be positive feedback and perception of gain or value to convince the person that the change is good and worth continuing.

Support for development of CBRM and CCM may require ongoing reinforcement and communication of success such as, for example, communication about near-hit events where losses were minimised due to control effectiveness.

Lack of overt line commitment and involvement

The use of the ORM journey models to define and plan for major changes involved in CBRM and CCM has been successfully adopted in many mining organisations. This series of articles will continue to provide information on the theory of CBRM and CCM, as well as the learnings from related practical experience from applications.

Other blog posts from this series

© Jim Joy. 2018 – The copyright of the content of this guest blog belongs to Jim Joy who has authorized CGE Risk Management Solutions B.V. to provide this content on its website.