Citizens in Half of U.S. States to See Minimum Wage Increases in 2021

Wolters Kluwer experts advise that the greatest impacts will be seen in California, Washington and Florida

Many states across the country are just days away from implementing changes to their minimum wage laws, according to payroll experts at Wolters Kluwer Legal & Regulatory U.S. With the clock ticking for businesses and payroll professionals to implement these changes, Wolters Kluwer has prepared a comprehensive analysis of legislative updates in 25 states that will raise the minimum wage in 2021, with 21 of those states enacting the increases on January 1.

Key takeaways from the analysis of 2021 minimum wage changes include:

“Those states following the step-up approach tend to have higher minimum wage rates than those taking a cost-of-living adjustment approach,” said Barbara O’Dell, JD, an Employment Law analyst at Wolters Kluwer Legal & Regulatory U.S. “The trend towards regional minimum wages, such as those in New York and Oregon, also reflect lawmakers’ recognition that costs of living are higher in large metro areas than they are in other parts of the state.”

“With the change in the presidential administration coming in January, we are closely monitoring for potential changes in the federal minimum wage rate which has remained at $7.25 an hour since July of 2009. The incoming Biden administration has expressed interest in increasing the federal minimum wage, but whether legislation to increase it would pass is an open question. 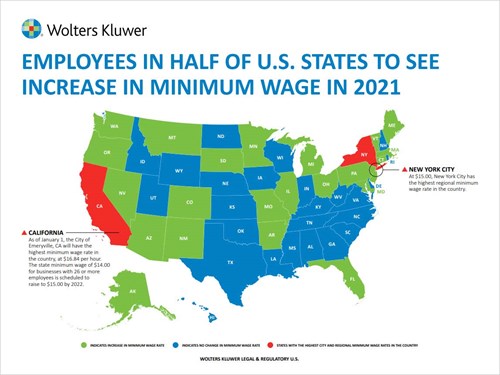 For members of the media interested in additional detail on changes to state minimum wage rates or an interview with a payroll expert from Wolters Kluwer Legal & Regulatory U.S., please contact us at [email protected].

Wolters Kluwer (WKL) is a global leader in professional information, software solutions, and services for the healthcare; tax and accounting; governance, risk and compliance; and legal and regulatory sectors. We help our customers make critical decisions every day by providing expert solutions that combine deep domain knowledge with advanced technology and services.

Wolters Kluwer reported 2019 annual revenues of €4.6 billion. The group serves customers in over 180 countries, maintains operations in over 40 countries, and employs approximately 19,000 people worldwide. The company is headquartered in Alphen aan den Rijn, the Netherlands.