A corporation, LLC, partnership, or sole proprietorship that does business under an assumed name (also known as DBA) may be required to comply with state assumed-name statutes. These statutes typically require the name to be registered with a state or local agency. They also impose penalties for failure to comply that the business and its owners and managers will want to avoid.

At one time it was not clear whether a business could operate under a name other than the name on its formation document or the name of its sole proprietor or partners (e.g., its true name). However, it is now well established that businesses may enter into contracts and otherwise transact business under an assumed name and have those contracts and actions be considered valid. 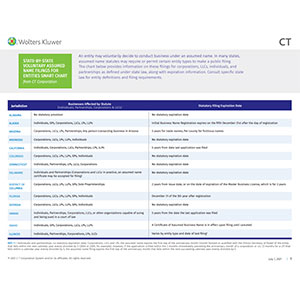 Why use an assumed name?

Sole proprietors and partnerships may also want to do business under an assumed name for privacy reasons or to have the business name better reflect their products or services.

Most states have statutory provisions governing the use of assumed names. In general, these statutes require business entities, individuals, and partnerships doing business under an assumed name to make a public filing. The document that is filed typically sets forth the assumed name, the true name, the state of formation, and the principal place of business.

An assumed name statute’s main function is to protect members of the public who deal with businesses that use names other than their true names. The public needs access to the true names of businesses for various purposes including checking credit ratings, searching for legal judgments, searching for security interests, bringing suit, and serving process.

Beyond requiring a filing, there is little uniformity among the assumed name statutes. The statutes even differ as to what they call this kind of name. Although most use the term “assumed name” others use “fictitious name”, “trade name”, or another term.

The assumed name filing procedures vary by state. Some require the assumed name document to be filed with a state agency. Typically this will be the Secretary of State (or other business entity filing office). Others require filings to be made on the county level. This may be in the county where -

There are also states that require a filing with the state office, followed by a recording of the document with the county. Some states require publication in a local newspaper of the intention to register and do business under an assumed name. There are also some states where sole proprietorships and partnerships file on the county level and corporations and LLCs on the state level.

A number of states provide that the assumed name filing is effective for a certain period of years and must be renewed.

Others, however, do not limit the term. If a business decides to stop using one or more of its assumed names, it can generally make a filing to cancel its assumed name registration.

Another difference is whether the state will protect an assumed name from being used by any other business. In some states an assumed name is exclusive but in most it is not. This means that when an assumed name registration document is submitted for filing, the filing office will not check its records to see if there is anyone else who has registered that assumed name or reject the filing on that basis.

Most assumed name statutes impose penalties on persons or entities that do business under an assumed name without making the required filing. In some states, there is a civil penalty while others impose criminal fines. In addition, some assumed name statutes provide that a non-compliant business may not maintain a suit or enforce a contract until it complies.

Another problem to be aware of is that the individual negotiating and entering into contracts for a corporation or LLC can end up being personally liable. This is generally not a statutory penalty but is based on the well-settled agency law principle that for a person doing business on behalf of another to avoid personal liability, that person (the agent) must disclose the fact of the agency and the identity of the principal (the corporation or LLC).

There are many good reasons to do business under an assumed name.

However, a corporation, LLC, other entity types or individual that choose to do so should keep in mind that there are state statutes regulating the use of assumed names and that a failure to register the name may lead to unwanted consequences, including fines for the entity and personal liability for its owners or managers.

Sandra Feldman
Publications Attorney
Sandra (Sandy) Feldman has been with CT Corporation since 1985 and has been the Publications Attorney since 1988. Sandy stays on top of the most pressing and pertinent business entity law issues that impact CT customers of all sizes and segments.
Explore related topics
Effective decision makingRunning Your BusinessIncorporation Services
Doing Business As (DBA)
States require that you obtain a Doing Business As certificate if you operate using a name other than your company’s full legal one. CT makes this process simple.
Product Details
Stay informed
Subscribe to our newsletters for the latest business compliance, industry updates and legislative news.
CT Expert Insights - Stay Informed
Sign up

BizFilings small business survey 2021: Motivations & challenges for business owners How to start a business: 10 steps to starting a business Attracting and hiring the right talent in a tight labor market