Foreign direct investment (FDI) is a critical part of the global economy. However, in recent years, government regulators around the world have increased scrutiny and, in some cases, intervened in transactions involving foreign individuals and entities – especially those that they consider give rise to national security concerns.

What has prompted the tightening of rules? Geopolitical uncertainty, cybersecurity threats, and increased protectionism are some of the motivations for governments to exercise greater control over foreign investment flow in their jurisdictions. Additionally, the COVID-19 pandemic exposed trade vulnerabilities that have made it a bigger priority for governments to be more proactive in enacting, enforcing, and widening their FDI regimes.

As a result, countries are reviewing a broader array of transactions in sectors that have typically fallen outside any review that targets foreign investments. Many are proposing new laws or tightening existing FDI regulations that screen transactions in certain industries and sensitive sectors. Many countries have stated that the increased scope of their FDI screening rules is not designed to deter investment but to help establish a more transparent process to deter malign actors, protect critical industries, and ensure competitiveness.

In this article, we explore some of the more recently updated or amended FDI screening regulations around the world, the impacts on cross-border transactions, and what corporate legal teams and law firms should keep in mind.

How does this impact mergers and acquisitions that involve foreign investors?

FDI screenings are not a new occurrence, but they are being looked at more closely. Navigating FDI screening requirements is now a critical part of the planning and execution of cross-border investments or acquisitions by corporations and the law firms that support them.

Transactions are far more likely to trigger screening requirements as more industries and sectors previously considered irrelevant from an FDI perspective, are falling within the scope of these regulations.

A key motivation for the shift in scope is that many governments are redefining what national security entails, going beyond critical infrastructure and defense to include technology, artificial intelligence, healthcare, the media, and more.
FDI regulations are evolving, so it’s important that all parties in a transaction understand FDI requirements and restrictions for overseas investments as well as transactions that take place locally but involve a foreign party or investor(s) to prevent disruptions to ongoing and future transactions.

Changing FDI regulations around the world

A notable example of a recent regulatory update is the European Union’s passing of an FDI screening regime, which went into effect in October 2020. While it does not require an EU-wide process, it does set out minimum requirements for its member states. Since its enactment, many member states have either passed new FDI rules or have reinforced or amended existing regimes locally. Among them, France, Germany, Spain, and Italy made significant enhancements to their local rules during the pandemic and have since decided to expand or keep some of those rules in place permanently. The Netherlands and Ireland are expected to pass their own FDI screening rules this year.

Moreover, the UK passed the wide-reaching National Security and Investment (NSI) Act that went into effect in early 2022. Canada, the United States, Japan, Australia, and New Zealand have also enacted or updated their local FDI rules.

FDI laws vary significantly by jurisdiction, and with many countries widening the scope for screening, it can add complexity to cross-border transactions.

Some of the key aspects of FDI screening rules to consider include: 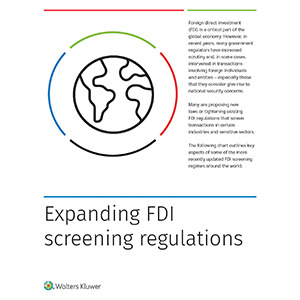 The foreign direct investment (FDI) is a critical part of the global economy.  Download the chart from CT Corporation for information about recently updated FDI screening regimes around the world.

Working on an international deal? Keep the following in mind.

Because of the increased scrutiny of cross-border deals, developing a comprehensive transaction plan that includes extensive due diligence, the identification of applicable regulations, how the scope applies to the deal at hand, and an outline and timeline of actions required by the applicable regime will be critical to successfully executing transactions.

Look at directives around the origin of the investment and the industry or sector of the business, in addition to details around:

No matter where your next cross-border deal takes you, CT Corporation’s global experts have the local know-how to help support you every step of the way - from due diligence work to document searches and retrievals and deal closure support. To learn more about how CT Corporation’s Global Transactional Services can help address your needs around the world, contact a CT Corporation representative at (855) 444-5358 (toll-free U.S.).


Access the FDI infographic by completing the form below:

DISCLAIMER
This article and supporting resources are intended to provide general information only. They are not intended to be complete or to constitute legal advice.
CT Corporation Staff

Rely on CT Corporation's suite of international products and services—available to you as needed—to keep you compliant as you do business across the globe.
Product Details
Expert Insights
Stay informed
Subscribe to CT Corporation's newsletters for business compliance updates and legislative news.
Sign up
Additional information
Contact CT Corporation
Access resources
View events