Today we’re releasing the updated performance analysis based on this student data. This most recent data set includes 228 Firecracker users and 499 non-Firecracker users. We wanted to focus our analysis on users who have been active on Firecracker in past year because of the significant changes we have made to the platform since summer 2015—the launch of Firecracker MD and Firecracker DO.

And still, Firecracker users don’t report studying more than non-Firecrackers, and these correlations persist even after adjusting for MCAT scores as a baseline measurement. 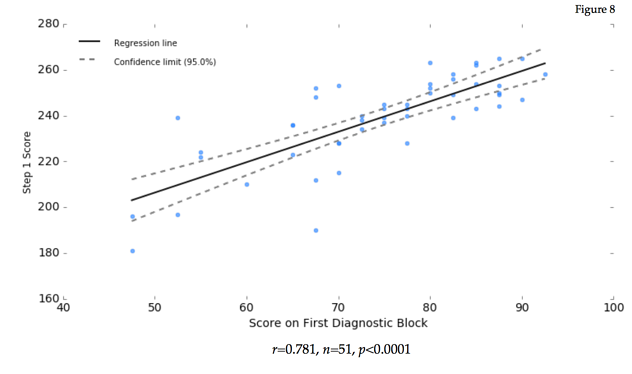 We did not find a correlation between the flat number of CVs answered and Step 1 outcomes. But we did find that performance on flashcards on medical concepts was a strong indicator of performance on related clinical case questions.

Overall we found that consistent Firecracker usage correlated with better performance on clinical vignettes, and ultimately better Step 1 outcomes. You can read the full paper here. It includes details on the above findings as well as an appendix that covers a product glossary and additional data.