Trading positions often face significant financial loss due to their exposure to volatilities present in underlying market risk factors. As it stands today, the trading book fails to capture the severity of such losses adequately, which has spurred the BCBS to propose a framework for the estimation of the minimum capital requirements for market risk, also known as the Fundamental Review of the Trading Book, more commonly known as FRTB (BCBS, 2013[1], 2016[2], 2017[3]). Moreover, the Basel Committee is currently monitoring and revising the implementation of the market risk standard, and proposing updated methods (BCBS, 2018[4]).

Market liquidity risk plays a key role in both the standardized approach (SA) and the internal model approach (IMA). In the IMA the framework introduces the expected shortfall (ES), substituting the value at risk (VaR) as a measure for the measurement of market risk. The new framework also introduces a profit and loss attribution (PLA) test that the trading desk must pass if they want to implement IMA.

To ensure banks do not create regulatory arbitrage, the new framework aims to close the gaps between the treatment of trading and banking book exposures. To this end updated revisions to the boundary between the two books have been proposed by the committee (BCBS, 20184).

The Standardized Approach to Market Risk

Banks must devote a series of methods for implementing the standardized approach (SA) (Figure 1): a) the sensitivities-based method (SbM), b) the default risk charge (DRC), and c) the residual risks add-on (RRAO) methods. The committee also proposes a simplified alternative standardized approach to market risk. 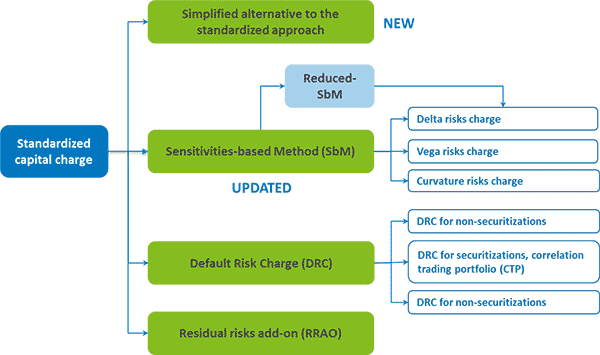 The SbM framework suggests that banks use sensitivity analysis for the estimation of capital charges against delta, vega, and curvature risks.

Banks should follow several steps for estimating the capital charges based on SbM. These steps include: Figure 2: Main steps for estimating capital charge based on the sensitivities-based method

Delta and vega risk charges are computed individually for seven risk classes, the capital charges within each bucket are aggregated and finally the capital requirements across those buckets is calculated. The weighted delta and vega sensitivities drive the capital on risk factors (RFs) and the correlation factors with and across buckets.

Banks also need to capture risks assigned to non-linear instruments which means they must estimate curvature risk dealing with the second-order sensitivity measurements. Thus, any changes in the price of an option not identified by delta and vega risk is addressed by curvature risk. The final Basel III framework approximates the curvature as an incremental capital charge above delta capital charge.

Figure 3: The three steps for estimating of the sensitivity risk charge at the portfolio level

Grounded by evidential eligibility criteria, a simplified reduced SbA may be an alternative option for banks. The absence of vega estimation and curvature risks, and the reduction of RFs and correlation scenarios under consideration are both benefits of the less demanding framework, however, the upsurge of risk weights under this method means the capital charge rises significantly.

Example of the Estimation of Delta Capital Charge

Let us examine a case of a banking institution based in the Euro-zone area that holds a portfolio consisting of three assets:

By employing SbM the bank estimates delta general interest rate risk (GIRR) capital charges following the steps presented below and as illustrated in Table I: Table I. Steps of estimating the delta (GIRP) capital charge

In conclusion, initially banks must apply the necessary analytics for estimating the market risk sensitivities, classify the risk exposures and the assets under study to identify the associated risk weights, calculate the risk capital charge based on the formulas provided by the framework, apply aggregation rules within and across buckets, report associated capital against risk and losses. The cycle process of implementing Basel III minimum capital requirements for market risk based on the standardized approach is illustrated in Figure 4. 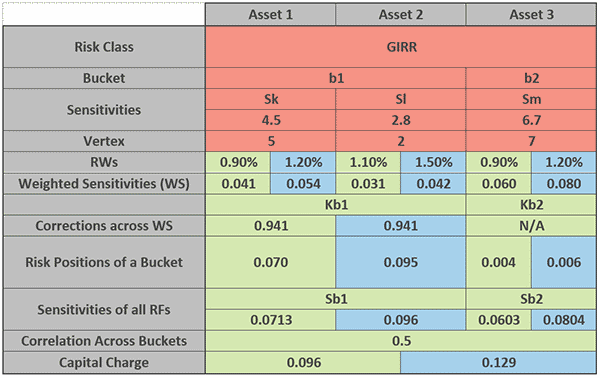 OneSumX FRR - the ability to connect it all together How to Prepare for IFR/IFD and IFPR How can banks best prepare for Basel IV & CRD V?