Throughout life, genomes are stable, but gene expression and their function may vary as we age.

The biggest challenge to clinicians is gene expression and ontogeny in children. Understanding pediatric pharmacogenomics (PGx) could be an important tool in providing effective drug therapy. But it is a complex field which has not been as extensively studied as other areas affecting a vulnerable population.

Throughout the developmental process, drug-metabolizing enzymes undergo changes, like all major organ systems developing to reach maturity. The levels of gene expression can vary depending on the developmental stages (infancy, childhood, and adolescence).

This change in enzyme activity can affect drug response and tolerance in children. It also means it is difficult to extrapolate data on children from adults’ responses. For example, adult responses to medications will involve two major organs: the kidneys and liver, which are responsible for drug metabolism and clearance/elimination. As developmental changes take place in these two organs, the total mass of drug metabolizing cells and the glomerular function will influence the metabolism in children differently.

Pediatricians are required to have some competence in pharmacogenomics, with the goal of personalizing therapy for children. However, many remain skeptical of its value. A 2009 survey by The American Society of Pediatric Hematology/Oncology reported that most pediatric hematologists are aware of PGx data and its application, but still do not perform genotype testing due to data lacking in the U.S. pediatric population, small sample sizes, and the fact that most existing studies are retrospective.

Although pediatrics represents 27% of the world’s population, clinical trials on children account for only 16.7% of the total number of trials registered on the World Health Organization website, according to a 2017 report.

Due to the lack of pediatric data, more large, prospective trials are needed to provide a stronger base of evidence. In some cases, where there is little data, we find that data is also contradictory and there are unanswered questions when it comes to clinical relevance of gene-drug associations, as is the case in studies of pediatric heart transplantation.

Ethical concerns also arise when it comes to pediatric studies. Due to children being more vulnerable than adults, informed consent must be handled carefully, and the decision-making process takes place between the child, parent, and researcher/clinician. Neonates, too young to give informed consent, are completely excluded from making any type of decision, whereas an adolescent could possibly make a partial decision in his or her care.

Also, in general, genetic discrimination, privacy, and ancillary disease risk information are concerns. A recent review cited a study in which 66% of respondents reported a fear that their information/data would be unprotected if they were to have a pharmacogenomic test completed. Although this survey did not include children, it would be logical to assume a similar percentage of parents would have the same reluctance to allow a PGx test done for their child.

Due to the dearth of tests related to pediatric PGx, many of the better-known drug therapies clinicians or researchers have found to be affected by genomic factors in children are those related to what might be considered more common pediatric conditions, or at least, those conditions for which it would not be unusual for pediatric patients to be screened.

For example, ADHD medications like atomoxetine would not routinely require genotype testing prior to use. But, data has shown CYP2D6 poor metabolizers may have 10-fold greater AUC (drug concentration in blood plasma over time), which may then increase the risk for adverse drug reactions (ADR). In response, the Clinical Pharmacogenetics Implementation Consortium (CPIC) recently released a guideline for atomoxetine.

Other conditions for which PGx has been observed to affect pediatric treatments include:

This chart from a 2014 British Pharmacological Society report takes a more detailed look at selected drugs and PGx tests that have been studied for pediatric patients: 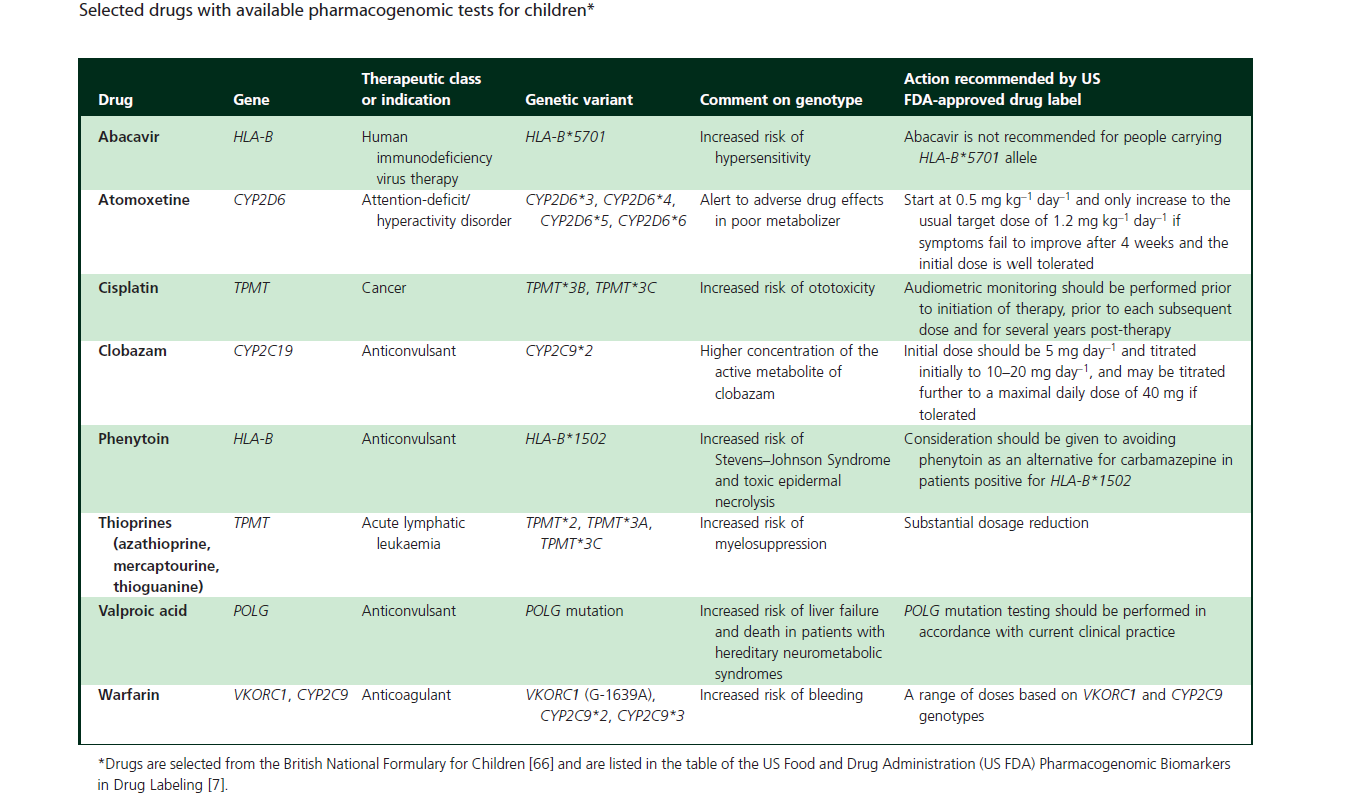 Next steps for clinicians

For clinicians such as pharmacists, nurse practitioners, physician assistants, medical doctors – really, anyone writing a prescription or developing a therapy plan – pediatric PGx information can be an important tool in helping them choose the appropriate drug and dose to assure their young patient is receiving the best care and that it is safe and effective.

There are PGx groups all over the world providing information about this field of study, although few are focused on pediatrics. Some resources include:

Kandace Schuft, PharmD, is Senior Clinical Content Specialist - Pharmacogenomics, Clinical Effectiveness, Wolters Kluwer, Health, working collaboratively within the drug information team to critically review and evaluate scientific, clinical, and product literature in order to create and maintain existing core pharmacology content, contributing to both referential and embedded products. She earned her Doctor of Pharmacy and Bachelor of Arts degrees from the University of Minnesota and completed a post-graduate pharmacy practice residency and pharmacogenomics certification program.