(NEW YORK, NY, March 2021) - Covid-19 has dominated the past year and resulted in significant changes in the way we do business. Many existing trends greatly accelerated--from e-commerce to digital payments. Several industries, including the cannabis industry, saw substantial growth driven by the pandemic-related lockdowns and other activities.

Cannabis was already among the country’s fastest-growing industries, but 2020 saw it taken to another level. At the height of widespread shelter-in-place orders beginning last March, dispensaries were classified as “essential” in many states alongside grocery stores, gas stations and pharmacies. This government recognition was a major indication that cannabis has been elevated to the mainstream.

2020 Was a Landmark Year for Cannabis

More States Legalized Cannabis for Recreational and Medical Use 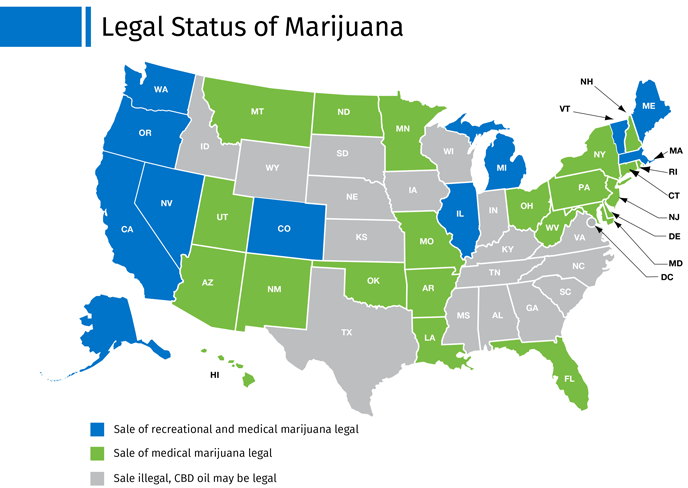 Unprecedented Activity on the Federal Level


Despite more states legalizing cannabis in 2020, at the federal level, marijuana remains an illegal controlled substance. For tax purposes, this prevents cannabis businesses from deducting many of their business expenses while the income received is taxable.

To help business owners understand and meet their tax responsibilities, the IRS  issued tax guidance to the cannabis industry in September 2020 in the form of frequently asked questions (FAQs).  These FAQs were followed up with the release of a marijuana industry website that provides additional tax-related information for taxpayers engaged in the cannabis business. While the goal of this guidance was to provide taxpayers with useful information regarding the taxation of the cannabis industry, it also serves as a reminder that they are subject to the same filing requirements and tax-paying obligations as every other taxpayer.

These FAQs also remind cannabis businesses that they are prevented by Section 280E of the Code from claiming credits and deductions. However, the guidance does not describe how costs of goods sold should be computed for these businesses, a point of contention that has been subject to litigation. The guidance reminds these businesses that they have the same tax payment and deposit obligations as any other taxpayer.  The IRS understands that not all cannabis businesses have access to bank accounts and noted that some IRS service centers can accept cash payments.


In a groundbreaking vote in December 2020, the US House of Representatives passed a comprehensive bill that would remove marijuana from the Controlled Substances Act and end the federal government’s decades-old prohibition on the plant. This bill would provide cannabis businesses with greater access to financial services and free these businesses from the Section 280E provisions that prevent them from taking deductions for ordinary business expenses. The bill was not taken up by the Senate in 2020.


Senate Majority Leader Chuck Schumer and senators Cory Booker and Ron Wyden announced on February 1, 2021 that they will push to pass this year sweeping legislation that would end the federal prohibition on marijuana. The White House has previously expressed support of similar action.


As many states face significant revenue shortfalls resulting from the ongoing pandemic, six states (Connecticut, Maryland, New Mexico, New York, Pennsylvania, and Texas) have introduced bills to legalize recreational marijuana or have governors who have called for legislation ahead of upcoming legislative sessions, while the Virginia legislature just approved a bill legalizing marijuana for adult recreational use, but not until 2024. In addition, several other states including Alabama, Florida, and Texas have indicated they intend to move forward with legalization.

2020 was an unprecedented year for legal and tax developments regarding cannabis. As we move into 2021, the ongoing financial impact of the pandemic and the results of the last election suggest it is likely to see even more landmark developments in the legalization of cannabis and the tax rules applying to cannabis businesses across the industry.