When is a fact not a fact?

When gathering evidence in the classic American TV show Dragnet, Sergeant Joe Friday famously warned witnesses to give him “just the facts.” Of course, a fact is a thing that is known or proved to be true. But how do you solve a case when the facts themselves are in question? Stephen Claypool, M.D., Medical Director at Wolters Kluwer Clinical Software Solutions’ Innovation Lab, and his team faced the same challenge when developing POC Advisor, a decision support system that detects escalating conditions early, and delivers patient-specific alerts and evidence-based treatment advice directly to the point of care, to help tackle sepsis.

Sepsis is the body’s overwhelming response to infection. There are more than 1 million cases of sepsis each year, according to the Center for Disease Control and Prevention and around 258,000 deaths in U.S. hospitals every year. It is not only the deadliest condition treated in U.S. hospital intensive care units but also, at an annual cost of around USD $20 billion, it is the country’s most expensive condition to treat.

For the first challenge tackled by POC Advisor, the goal was to develop decision support technology that could harness real-time patient data and trusted clinical knowledge to improve sepsis care. However, being sepsis, Claypool and the POC Advisor team knew it would be a complex task. They would have to take a long, hard look at the facts they were dealing with.

When is a fact not a fact?

As Jim O’Brian, M.D., says in the Wolters Kluwer Breakthrough video below, “One of the difficulties … in treating sepsis is there is no single sign or symptom … people come in with a wide variety of complaints … There is no single diagnostic test that tells us if [a] person has sepsis or not.”

In addition, as a ‘For the Record’ magazine interview with Claypool noted, from the American College of Chest Physicians to the Society of Critical Care Medicine, there are multiple definitions of sepsis.

Compounding the complexity, there are many variations of clinical criteria of sepsis. Different types of patients are at different levels of risk from the same symptoms. And physicians often document sepsis differently. All of this means that the diagnosis of sepsis is highly subjective and, thus, often inconsistently applied.

Considering the complexity of interdependencies and variations of the ‘facts’ in play, one of the core challenges was to figure out how to compare ‘apples to apples’ across all sources of data, so that POC Advisor could ultimately deliver highly accurate advice, at the right time, directly to the point of care.

Early on in the development of POC Advisor, Wolters Kluwer experts worked hard to normalise and map data to common terminologies across all the different available sources of medical evidence. Amongst many other sets of data, the Innovation Lab tackled rationalising the surviving sepsis guidelines. After much work, they developed a language and rules engine that together, could compare data apples with apples.

You can see how those language and rules engines work together with a patient’s EHR (Electronic Health Record) and alert system in the POC Advisor video below.

A patient’s vital signs and lab results are relayed from their EHR to the cloud-based POC Advisor through a secure, compliant, VPN link. The language engine then maps the data to standard terminologies. Behind it all, the rules engine accesses standardised data and executes thousands of clinical scenarios to decide what decision support is warranted. It does that by drawing on trusted clinical content sources such as Lexicomp. Via numerous devices, POC Advisor can then deliver clinical decision support directly to clinicians at the point of care. The nurse is alerted to initiate sepsis protocols and prompted to communicate with the on-call physician for further orders. 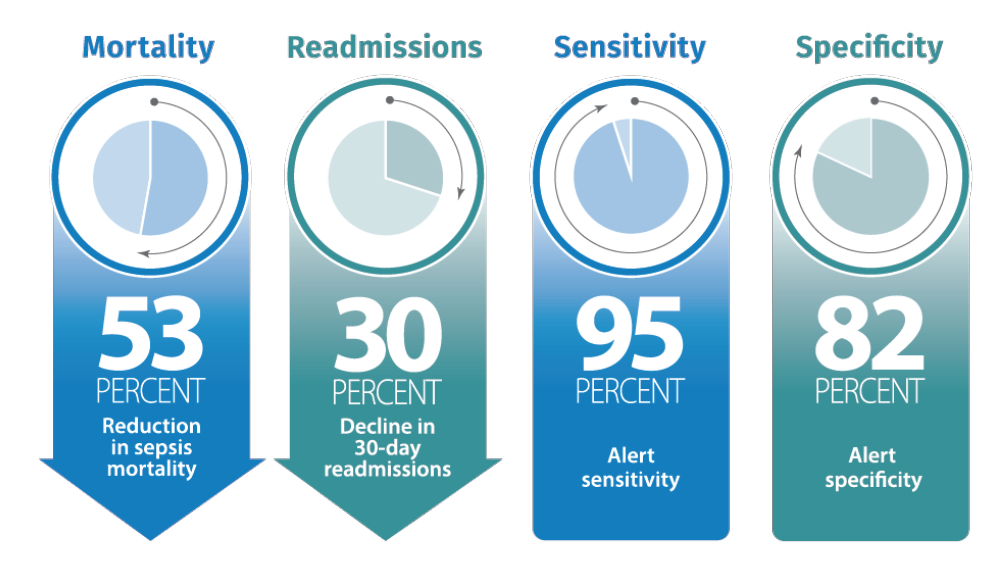 In the pioneering POC Advisor study at Huntsville Hospital, researchers collected sepsis data over the course of 10 months, following a five-month implementation phase in which POC Advisor was added into the clinical workflow. The end result was a 53 percent reduction in sepsis mortality. You can find out more about the results on the POC Advisor website including:

As Claypool said of the Hunstville study, “Prior to this… there hasn’t been a study of an electronic system that I’m aware of that has significantly improved mortality. That’s because most systems generate many false positive alerts, so they are ignored and outcomes are not improved. In this study, we used an electronic solution that takes into account existing patient co-morbidities and labs and adjusts the analysis on a patient-specific basis… The end result was a dramatic improvement in mortality.”

So, how do you solve a case when the facts themselves are in question? It seems that Claypool and the Innovation Lab have their answer.

By normalising and mapping data to common terminologies across all the different available sources of medical evidence. By building a strong understanding of the local context inside the hospital itself. And by leveraging real-time results to become smarter over time, it is possible to get a strong grip on the ‘facts’—and deliver tangibly improved outcomes.

As POC Advisor continues to tackle sepsis in hospitals across the United States, future applications of POC Advisor are expected to include improving outcomes related to pneumonia, heart failure, diabetes and more.

Presumably, they too will be tackled one rule at a time—and help get the ‘facts’ straight.

AI in healthcare: What nurse leaders should know 5 Forces for the Future: Accurate and actionable data across care settings becomes the currency of the new health ecosystem What is health information exchange and how can it help nurses?