The Series LLC: An organizational structure that can help mitigate risk

While most people are familiar with the limited liability company (LLC), few are familiar with a variation of the traditional LLC called a Series LLC. The Series LLC can help organizations protect their assets from liability, and in many cases can do so with less expense and more flexibility than other structures that mitigate liability risk like the holding company or parent-subsidiary structures.

The Series LLC is a complex entity that can be hard to understand. It comes with a number of risks and unanswered questions that have so far limited its use, to some extent, to sophisticated enterprises like investment companies and special purpose entities. However, more states are adopting Series LLC laws. As the laws evolve and the business community becomes more comfortable with the concept, the Series LLC may become a more popular option that more business owners and lawyers may wish to familiarize themselves with.

What is a Series LLC?

A Series LLC consists of the “parent” or “umbrella” LLC with one or more series that are established under the parent. Each series has characteristics that are separate from the Series LLC itself and every other series. Each series can have its own assets, members, managers, purpose, and investment objectives. And if certain statutory requirements are met, the debts, liabilities and obligations of one series are enforceable only against the assets of that series and not against the assets of any other series or the Series LLC. As such, each series basically functions like a separate entity within the Series LLC.

Of course, Dick and Jane also could have formed two separate LLCs. But, depending on the state and circumstances, that might have been a more expensive option and more of an administrative headache.

The Series LLC is a creation of state law and can only be formed in a state that authorizes the formation of a Series LLC. Not all states do. The jurisdictions that do authorize Series LLC formation include the following:

Additionally, California and some other states do not allow Series LLC formation but do recognize Series LLCs formed in another state. Such foreign LLCs can register and do business within these states.

It is also important to be aware of some states, like North Dakota and Wisconsin, that have “false series” laws. Although the LLC law refers to “series”, the series they are referring to is more analogous to the series of stock corporations can issue. These series allow for membership interests in which the members of the series can have different voting or financial interests than other members. But there is no liability shield, and these states do not actually authorize the formation of Series LLCs. 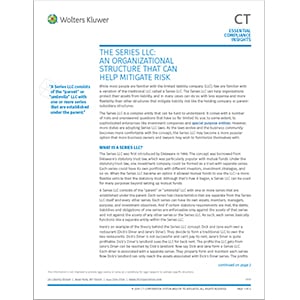 How do you form a Series LLC and form or establish a series?

The state laws governing the formation and operation of a Series LLC vary greatly. In general, a Series LLC is formed in the same manner as a traditional LLC. That means it files a document generally called either Articles of Organization or a Certificate of Formation with the state’s business entity filing office, such as the Secretary of State.

The main difference is that the formation document will have to include a statement that the LLC may establish series which are protected from the liabilities of other series and the LLC itself. Some states have separate forms for Series LLC formations. Some do not.

A Series LLC is subject to all of the provisions of the LLC law as a traditional LLC except for those that specifically apply to Series LLCs—such as the recordkeeping and liability limitation provisions. That means, for example, a Series LLC will be required to appoint and continually maintain a registered agent and file an annual report.

There are three basic approaches the states take to forming a series. In some states the series is established in the Series LLC’s operating agreement. No filing is required. In other states a series is formed by filing a document, called, for example, a certificate of designation or a certificate of registration, with the state filing office. Delaware takes a third approach. It has two types of series—“protected series” which are established in the LLC agreement with no filing required, and “registered series” which require the filing of a certificate of registration with the Delaware Secretary of State.

Naming requirements for a series also vary by state. In general, the states that require a filing have naming requirements. Typically, the name of the series will have to contain the name of the Series LLC and the series’ name itself will have to be distinguishable on the state records from the names of other series and other domestic and foreign entities.
Other notable differences in the state laws include whether each series will have to file an annual report and pay an annual fee, whether a certificate of good standing can be issued for a series (which might make it easier to get loans or business partners) and how process can be served. (Although in general the Series LLC’s Registered Agent is the Registered Agent for each series.)

Failure to properly maintain separate books and records can result in a loss of the liability shield. (This is why the Series LLC has been said to be a poor choice for people who are bad at bookkeeping or don’t have good accounting advice.)

What are the main reasons for forming a Series LLC?

There are a few common reasons why organizations choose to form a Series LLC. These include the following:

One of original advantages of using a Series LLC rather than forming separate LLCs was the savings in formation costs. This can still be the case with the recent trend in state laws requiring the filing of a document, and the payment of fees, to form each series. But this may not be the advantage it once was.

There can still be savings, though. For example, in the mutual fund field it is thought that obtaining the regulatory approvals for a fund within a series can be done with less time and expense than if each fund was a separate entity.

One of the major advantages of an LLC over other entity choices is that it is so flexible—giving the members many options in deciding how to split the management and financial rights, with few statutory mandates. That flexibility exists in the Series LLC and in each series.

The Series LLC structure is a logical option for holding companies, which typically own but do not operate their portfolio businesses. With a Series LLC, a holding company can hold all individual businesses under a single umbrella while mitigating the risk of one business’ assets being used to satisfy the debts or liabilities incurred by another of its businesses.

Series LLCs can also be a useful tool for real estate investors who own multiple properties. Under this scenario, each property can be associated with a separate series within the Series LLC. If one series is involved in litigation—say, for example, hazardous wastes are found there—the assets of the series associated with the other properties cannot be used to pay for clean-up costs. Or so the theory goes.

What are the risks of operating a Series LLC?

While the Series LLC has clear advantages under some scenarios, there are also risks and unresolved issues of which to be aware.

For one, the tax treatment of Series LLCs and series by both the IRS and state tax departments is unclear. The states do not provide uniform and consistent tax guidelines. In some states a Series LLC is one taxable entity. In others, they are viewed as multiple taxable entities. As for the federal income tax treatment, the IRS has not issued final rules on the subject. However, the IRS did issue proposed regulations under which a series is treated as an entity formed under state law. The classification of a series would then be determined under the same “check the box” rules that govern the classification of other entities.

Federal bankruptcy laws also offer little guidance on Series LLCs. Because the U.S. Bankruptcy Code does not recognize the Series LLC, there is no consensus as to whether a Series LLC must file bankruptcy as a single entity, or if each individual series can file for bankruptcy without affecting the rest of the series or the Series LLC itself.

Other question marks involve how series will be treated under the securities law and how to perfect a security interest in the assets of a debtor series under the Uniform Commercial Code.

As mentioned above, comingling funds or assets is a significant risk for Series LLC operators, especially those with less experience. Assets must be maintained and accounted for separately. However, what is less clear is how serious the violation of the separation requirement has to be to result in a loss of liability protection. Will any minor error be enough? Does it have to be material? And can it be cured before liability is assessed?

Another significant question mark is what happens if the Series LLC and/or a series does business in a state other than its formation state, particularly if it is a state that does not authorize the formation of Series LLCs or address the qualification of foreign Series LLCs. There are questions as to how the Series LLC qualifies to do business, whether and how a series qualifies, and most importantly will the courts of the foreign state respect the liability shield authorized by the formation state.

Factors to consider before forming a Series LLC

All of the advantages and risk factors of using a Series LLC must be considered before deciding whether this structure is beneficial for any particular business or venture. Although formation of a Series LLC is relatively simple it is a complicated structure that, unfortunately, is not well understood. An experienced corporate service company can assist with filing the formation documents, providing the Registered Agent, filing annual reports, obtaining certificates of good standing and certain other compliance needs. Still, the advice of legal experts familiar with the Series LLC is highly recommended to ensure the requirements to maintain the liability protection are met.

It’s also important to understand that the liability protection offered by the Series LLC is not ironclad. The Series LLC has yet to be vigorously tested in court. This means the extent of the liability protection offered is still somewhat unclear. Those seeking more certainty in terms of risk mitigation may wish to look elsewhere. This is especially true of those who anticipate doing business in states other than the state of formation.

Series LLCs offer a variety of interesting benefits and protections. Yet they are also a fairly new business structure—and one that is still not widely understood. The Series LLC has not been tested in courtrooms, which means that its liability protection benefits remain somewhat theoretical. Those operating a Series LLC in states outside their home state may wish to proceed with caution, as it is difficult to predict whether the courts of those states will respect the liability shield.

Overall, most business owners who want to segregate their assets in order to provide a liability shield will still find the process of using separate and distinct LLCs to be the safer and simpler option. At least that’s true today. But as the laws evolve and the business and legal communities get more comfortable with the concept, the Series LLC may become a much more popular option.

Sandra Feldman
Publications Attorney
Sandra (Sandy) Feldman has been with CT Corporation since 1985 and has been the Publications Attorney since 1988. Sandy stays on top of the most pressing and pertinent business entity law issues that impact CT customers of all sizes and segments.
Explore related topics
Risk managementLimited Liability Company (LLC)

Contact us today for business registration and business compliance assistance.