How this Firecracker scored a 266 on USMLE Step 1

Firecrackers report “ridiculously high” USMLE scores all the time, but most don’t share exactly what resources they used, how they used them, when they started using them, or what their NBME practice test scores were leading up to the big day. One Firecracker did all this and more! You can read about his experience preparing for USMLE Step 1 below.

His hard work paid off—big time. Here’s what he got in the mail from the USMLE: 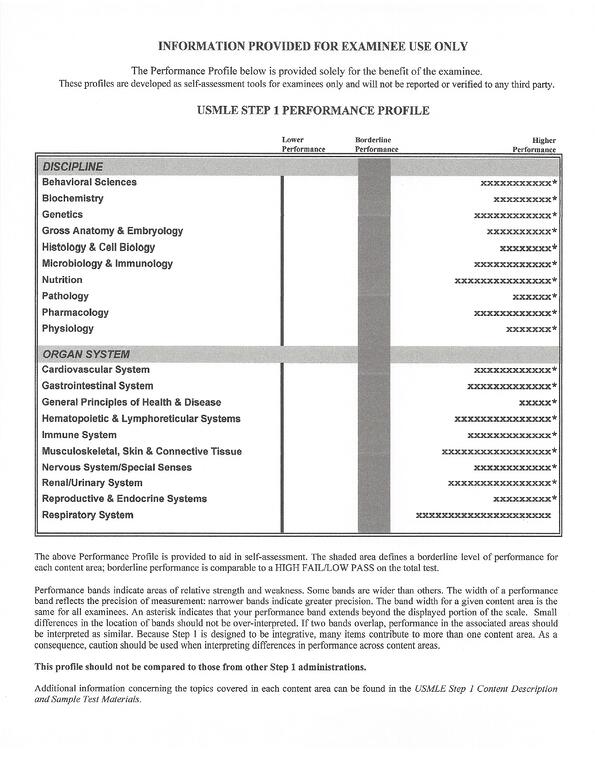 Mr. 266 posted his experience on Student Doctor Network, and we cut and pasted it below.

Here’s what he said:

”So here is my Step 1 experience. For the test specifically, I don’t remember too many specifics other than a few questions asking about cutaneous innervation for certain areas. But each exam is different so I don’t think there’s use in saying what specific topics to focus on. Nothing really stood out to me as being more heavily emphasized.

It is really hard to say what one resource was most useful for me. I could probably narrow it down to the 2 most important resources being Gunner Training (now Firecracker) and UW. A distant 3rd were the NBME practice tests. I owned a copy of First Aid but didn’t like it much. I never went through the whole book. I went through the entire cardiology, nephrology, heme/onc chapters along with my classes. I pretty much stopped using it after that. It just didn’t help me much.

Firecracker has everything in First Aid and more, is more accurate and is much easier to use. I could fall asleep after trying to read for a few minutes from First Aid. Firecracker is more interactive, so I can do a bunch of questions at a time and stay awake and focused. If I went on vacation and didn’t do my daily review for a week and had a bunch of questions pile up, I could spend 5 hours in a day doing questions. So a big plus for Firecracker is that it is interactive, holds my attention and quizzes me on the things I need most, the whole point of spaced training and adaptive technology. I started Firecracker at the very beginning of first year and used it very consistently throughout all my classes. I go to a pass/fail school where lectures are mostly optional attendance. I actually used Firecracker as my primary resource for my classes in place of lectures, lecture notes, textbooks, review books etc. I consistently got above average on my class tests and well above average on nationalized shelf exams. So I give an A+ to Firecracker. Seriously a very, very good resource especially when started early.

I don’t feel much need to talk about UW, since I think everyone agrees that it’s solid. For sure use it. The UW self-assessments are also very nice. I had Rx but didn’t like it too much. I tried it after I already had a lot of exposure to UW, so maybe that’s why. It simply isn’t as good of a question bank.

I used Pathoma during most of second year and liked it. It’s hard for me to quantify how helpful it was. He’s a great teacher and does well with explaining concepts. But I felt that he didn’t cover a lot of details that are still important to know. So use this resource to increase understanding. I didn’t use it during dedicated study.

Ranking of resources, with the first two being way ahead of the rest:

During second year I started using UW along with classes. Most people say to save it for dedicated study. But it’s a great study tool and so I used it as such. I would do question blocks by subject, whichever subject we were covering in classes, on tutor non-timed mode. I would read the entire answer explanation and make sure I understood it. I didn’t focus excessively on memorizing details. I felt like Firecracker was more than enough for memorization. I don’t remember what I started at, but my percentage for this first pass with classes was 78%. I got through the whole question bank, except for around 30 hepatic questions, I think. I finished the first pass about a month before classes were over and before I started my dedicated study time. I had a spreadsheet on Google Drive where I recorded all my incorrect answers. I had a sheet for each subject and would write down the concept being tested, why I got it wrong and how to correctly apply that concept in the future. My initial plan in doing this was to review these on a regular basis. I didn’t have the time or motivation to do so. Even so, just writing down in my own words the concepts and my mistakes helped reinforce the material.

I continued to use Firecracker heavily. One thing I forgot to mention previously is that I actually banked a bunch of second year material during first year. When learning about the CV system in physiology, I would bank as much heart pathology and pharm as I could understand with my knowledge of physiology. This made second year that much easier. It also made my question load for Firecracker decrease, since by the time second year rolled around I had a mastery of most of the material, and I was seeing most questions once every 60-90 days. The concept behind Firecracker is seriously very simple and very powerful. Once you learn something, review it at the appropriate interval so you don’t forget it. During second year I never had to review physiology, anatomy, histo or anything else like that because I was reviewing it continuously with firecracker. Once dedicated study came, I didn’t have to re-learn anything because I was seeing the material on a regular basis.

I had about 6 weeks for dedicated study. It ended up actually being more like 4-5 because I got sick twice during it this time and had some other things happen that took a lot of time. My days were not as consistent as I would have hoped, but I would say on average I studied 6-8 hours a day, Monday-Saturday. I took Sundays off. I think this is a very good thing to do. I never once felt burned out during my study.

Once dedicated study time started, I reset my UW account and started it over again. I started out doing 2-3 blocks a day, always random and timed. I would go over my incorrects, but I didn’t spend too much time doing so. I would find what I missed and focused on that. If I got a question right without guessing, I didn’t spend any time on it. I used the same strategy as before, making a spreadsheet with my incorrects and recording the concept being tested and why I got it wrong. I went over this spreadsheet a few times, especially in the few days leading up to the test. I did my first NBME at the very beginning of dedicated study to get a feel for where I was. I would then do at least one NBME or UWSA a week, often two.

During the last 2 weeks I focused a lot on endurance. I didn’t feel like I would learn much more. I already had a good foundation and felt like I knew the things I needed. Any extra points would likely have been from memorizing very low yield stuff. On many days I would do a practice test, then right after that, 3 UW blocks to simulate a 7-block test. 3 days before the test, I did 7 UW blocks in 5 hours, again just working on endurance. Obviously it was mentally tiring to do so, but I made a conscious effort to stay focused and think through each question. I think this ended up helping a lot since on test day I never felt fatigued. Test day was pretty easy compared to some of the days leading up to it.

There’s nothing much to say here. My first 2 blocks were much harder for me. I think this was mostly because I was more anxious. Blocks 3-7 were pretty easy, and I don’t remember ever feeling anxious or concerned at all. I finished the first 2 blocks with about 5 minutes to spare, and the rest with 10-20 minutes to spare. On about half of the blocks I had enough time to review all my marked questions (and I marked generously) as well as review most questions a second time just starting from the beginning of the block. This was good, because I remember coming across a handful of questions that I ended up changing. Some questions that I reviewed and changed the answer to, I had simply misread the question the first time. So if you have time, I would say it’s worth it to check answers all the way until you run out of time.

I felt like my break time was more than enough. I didn’t take much break time during practice tests.

Advice in a few (relatively) words

Firecracker is awesome. Give it a try. If you like it after a month, stick with it. You’ll be amazed at how much you know and remember. UW is solid. Do practice NBMEs. One thing I learned from doing these was that I thought too hard. Honestly, close to half of the questions I got wrong on NBMEs I had the right answer chosen, but then thought excessively and found some roundabout way to justify another answer (I was thinking about them like I would about a UW question). If you’re tired or burned out then take a break. I made sleep a priority during dedicated study time and was getting around 9-9.5 hours a night. It made my study time much more manageable. I never felt stressed during study time or during the test itself except for those first 2 blocks.”

If you’re new to Firecracker, sign up today and get a free month to try us out! Pre-meds who want to study like a med student (and crush the MCAT), click here. Med students and IMGs, click here.