Thus far, 2018 is off to the fastest start for merger activity since the height of the dot-com boom nearly 20 years ago.

Mergers and acquisitions volume for the first quarter set a record, hitting $1 trillion faster than in any previous year, according to Dealogic, which provides data to the financial industry. The number of deals coming to market is up 50 percent over 2017, and 18 of the deals announced this year have been for $10 billion or more, also a record.

U.S. companies have led the way with 44 percent of the total deal dollar value. Nine of the $10 billion-plus deals announced this year involved U.S. companies. The U.K. and China also have seen strong activity, with their strongest share of the deal market since 2008. Germany, too, is experiencing an upsurge in deals, spurred on by a $55 billion megadeal involving two of the country’s largest energy producers.

Analysts credit the recent passage of U.S. tax reform legislation and a rising global economy for the surge in deals. But deeper trends are also pressing companies to act. Many of the deals have been highly strategic transactions driven by companies looking to acquire technology and disrupt new markets—or to avoid disruption themselves.

If recent history is any guide, it’s those competitive factors that are likely to continue to keep deal volume relatively high, even if the pace slows to some extent because of volatile markets, political uncertainties and concerns about international trade. While deal activity didn’t start at the torrid pace of 2018, M&A volume in 2015, 2016 and 2017 reached levels not seen since before the global financial meltdown. Barring a major economic development, the near-term corporate appetite for deals is unlikely to ebb.

A prescription for deals

The largest deals announced this year have been in the healthcare industry, and they’re a prime example of the underlying forces driving the present uptick in M&A activity. 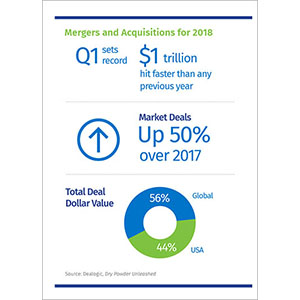 In two of the highest-profile deals, a giant pharmacy company and major health insurer have agreed to merge. Talks between a third leading pharmacy company/global retailer and a large health insurance company are also underway and could result in a proposed deal before year’s end.

Should the mergers pass regulatory muster, they may dramatically remake the pharmacy and health insurance industries. The consolidation is designed to help the companies reduce costs and grow despite regulatory and market limitations. As the Wall Street Journal recently reported, the deals show how “the lines between traditional segments in health care are blurring as companies, saddled with mature businesses and in many cases restricted to buying rivals, enter new areas in search of growth.”

Fear is also a factor. The companies are girding themselves for a potential onslaught from well-heeled, technology-driven foes. The largest online retailers have been seeking to compete for customers in the health products space and may have their eyes set on the pharmacy and insurance industries. “Everyone’s moving into one another’s space to position themselves for whatever happens,” Lawton Robert Burns, a professor at the University of Pennsylvania’s Wharton School, told the Journal.

Health care is just one of the industries where industries or industry sectors are converging. Energy, construction, manufacturing, retail, technology, telecommunications and financial services companies are also experiencing—or are expected to experience—a wave of such deals.

In the financial sector, for instance, where financial technology (or “fintech”) companies are competing with traditional banks for customers, analysts see potential for strong activity throughout the rest of the year. “We expect larger banks to acquire fintech capabilities and continue evaluating whether businesses are core to their strategy and divesting those that no longer fit,”Deloitte analysts said in a recent report. In another report, the Deloitte analysts wrote that “changes in the financial services industry are driven by the costs of technology and compliance. Another factor is margin pressure as a result of reduced fees on professional services.”

The hunt for tech

For a number of companies in the market, the hunt is on for merger partners who can improve their technology or enhance their digital strategies. Technology acquisition was the number one reason companies cited for M&A efforts in 2018, according to a recent survey of more than 1,000 larger-company executives by Deloitte.

J.P. Morgan concurred in its own report on 2018 deal trends:

“The rate of technology-driven changes will continue to accelerate and disrupt industries. M&A will be instrumental as companies look to acquire technologies, capabilities and scale needed to differentiate and compete.”

Many large companies face a dual problem: The pace of technological change continues to increase, changing the way customers interact with products and industries. Meanwhile, many companies have cut back on their research and development budgets. J.P. Morgan noted that, as a whole, S&P 500 companies have reduced their capital and R&D investments during the last 10 years. Thus, if they don’t buy the technology they need, they may not be able to withstand a disruption in their industries.

“Technology is creating more differentiation between the largest, most successful firms and the rest of the market, which suggests that disruption is fueling a ‘winner takes all’ environment,” J.P. Morgan said in its 2018 M&A report. “For boards and corporate decision-makers, these changes have implications on valuation, market share, capital allocation and core business models...To make the corporate conundrum even harder, investors and, in particular, shareholder activists often do not give value to incumbents for investment strategies with unproven outcomes or long time horizons.”

Buying technology can help—saving years of development time and instantly helping to improve a company’s online offerings. That’s why more traditional, brick-and-mortar companies are seeking out technology players. In March, for example, one of the nation’s largest department store chains purchased a pair of e-commerce start-ups to help improve its digital sales efforts.

The move prompted questions from the retail world that could apply to nearly any industry. Will the company invest in ongoing research and development to help its just-purchased technology keep up with the times? If it wasn’t investing in R&D before, why would it do so now—particularly given the expense and the antipathy of some investors to such efforts? Without R&D, will the company simply remain in buying mode to solve its problems for the foreseeable future?

The age of uncertainty

Even as companies grapple with the impact of their purchases, they must contend with a number of potential challenges before their deals are finalized. Obviously, just because a company has announced a deal doesn’t mean it will cross the regulatory and financial finish line.

For global deals involving U.S. companies, in particular, the hurdles appear to be growing. The Trump administration has taken a strong, protectionist stance on foreign ownership of U.S. companies. It’s looking into restrictions on Chinese investment in the country. And in March, President Trump blocked Singapore-based Broadcom’s $117 billion deal to buy U.S.-based chip maker Qualcomm. Trump cited “credible evidence” that the deal would be a national security threat to the United States. The deal, if approved, would have been the largest tech merger in history.

Trump, on the campaign trail, expressed distaste for mega-mergers in certain industries. In November 2017, the Department of Justice filed a lawsuit to block the $85 billion merger of AT&T and Time Warner Inc. on antitrust grounds. The case is seen by business interests as a critical one, touching on the government’s powers to quash mergers of complementary companies. (Usually, the government objects to mergers of direct competitors.)

The Wall Street Journal said a decision in the case could affect “how strongly the Trump administration, with its rival populist and pro-business factions, pursues the kind of vigorous antitrust enforcement that was a hallmark of the Obama administration.” It added: “The ruling could affect major pending healthcare mergers and may have ramifications for the tech economy.”

In spite of the regulatory uncertainties, the tax reform legislation enacted in December practically guarantees a period of M&A growth. U.S. multinational corporations must repatriate cash back to the United States that had been stowed offshore to avoid tax penalties. Using repatriated cash, in turn, gives companies a way to fund the kinds of strategic acquisitions needed to stave off disruption.

Another wealthy group of dealmakers also may soon be driving activity. Private equity firms have largely remained on the sidelines of the recent upswing in merger activity. Last year, according to Hugh MacArthur, global head of private equity at Bain & Co., 38,000 companies were bought and sold. Private equity bought only 8 percent of them—a percentage that has declined four years running.

The quiet times for private equity are unlikely to last. By some estimates, private equity firms are now sitting on more than $1 trillion capital that needs to be invested.  Hugh MacArthur told Bloomberg in February that the private equity market could inject a huge dose of additional capital into the M&A market, essentially recreating what the corporate players are currently doing: cross-sector transactions worth tens of billions.

“Companies need to constantly reassess whether they can sustain their competitiveness, ”Susie Huang, head of M&A for the Americas at Morgan Stanley, said in a recent article for the firm’s website. “Virtually no industry is immune to the competitive pressures emanating from digital and technology disruption.”

Again, while deal volume may slow temporarily because of factors like political turmoil or stock price fluctuations, favorable corporate tax policies and a wave of private equity investment are likely to keep the merger market active in the short term. Longer term, ongoing technological disruption is forcing companies across multiple industries to consolidate to remain competitive. With those factors in play, expect the steady stream of transformational deals to continue for the foreseeable future.

To learn more about how CT can provide mergers and acquisitions support for every stage of the deal, contact your CT representative or call 855.316.8948 (toll-free U.S.). 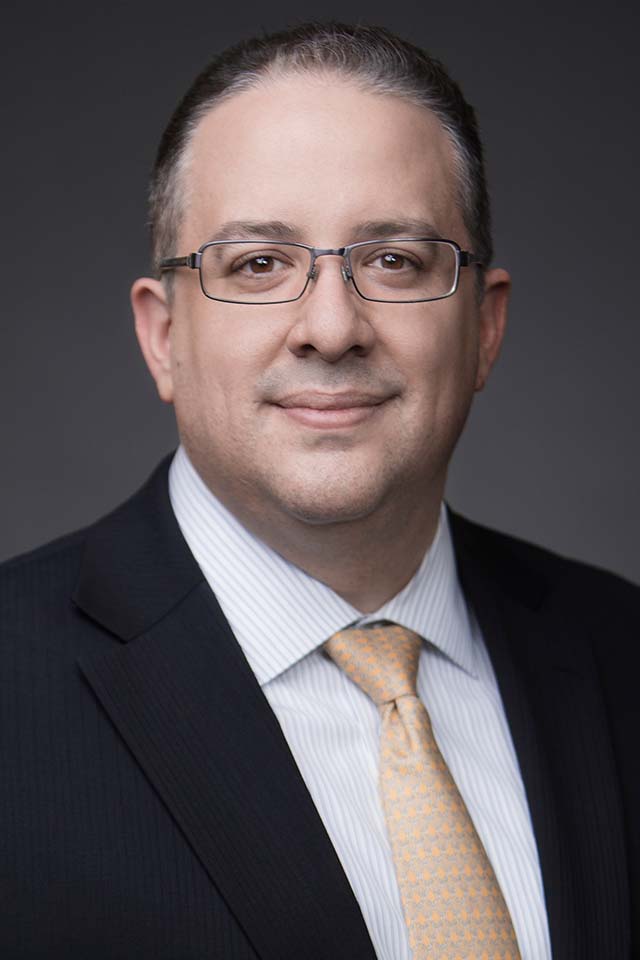 Domingo Vazquez
Vice President and Head of Corporations
Domingo Vazquez is an accomplished executive with 20+ years of experience in developing and executing sustainable growth strategies. He has extensive expertise in the legal, compliance and business services industries and has driven value in both startups and Global 2000 enterprises.
Explore related topics
Financial intelligenceRunning Your Business
Stay informed
Subscribe to our newsletters for the latest business compliance, industry updates and legislative news.
CT Expert Insights - Stay Informed
Sign up