Intellectual property (IP) is in a state of flux worldwide. The advent of the digital economy has been a major disrupter in the field, as it has been in most others. The Middle East has traditionally not been the most ‘IP-friendly’ region in the Middle East, with the registering of trademarks and other IP rights often being a protracted, weakly enforced and very expensive process.

From IT to IP

Charles is at heart an IT geek, which explains his Bachelor of Science (BSc.) in Computer Science from the University of Jordan. After graduation, he worked for some years in different IT companies in a technical, support function.

He would eventually join AGIP, becoming head of its IT department. By sheer osmosis, Charles eventually got increasingly involved in the IP field, including legal aspects thereof. He took a series of executive-level courses in law and management in order to hone his skills. IP had grabbed his interest.

Today, his work for AGIP is mostly managerial and business development-related, a role he relishes. His IP-related resumé is indeed impressive: In 2011 he was elected to the International Trademark Association (INTA)’s Board of Directors, with which he served for three years. To date he remains the first and only director on that Board from the Arab region.

He has also been a member of the United Nations’ Internet Governance Forum (IGF) and its Multistakeholder Advisory Group (MAG), as well as a member of the Intellectual Property Constituency (IPC), which advises the Internet Corporation for Assigned Names and Numbers (ICANN) Board on policy issues relating to the management of the domain name system. Charles’ career is certainly one filled with impressive-sounding acronyms!

Charles Shaban and his passion for IP is better appreciated when one understands the company for which he proudly works. AGIP was established in Kuwait in 1972 under the name of T.M.P Agents at a time when IP was still in its infancy in the Arab region.

Headquartered in Amman, Jordan, today it has local representation in 35 countries across the MENA region and beyond. Being part of a large professional services group, Talal Abu-Ghazaleh Organization (TAG-org), means AGIP effectively has a formidable footprint in over 100 countries. As Charles quips, “We want to cover every major city in the world”.

AGIP has consistently been at the forefront of efforts to improve the infrastructure of IP in the Arab world. It has also published numerous ground-breaking reference works on IP in the Arab world, including the compilation of an English translation of all Arab IP laws, as well as the publishing of a major IP Dictionary.

WK and AGIP: A Fortuitous Collaboration

It makes sense that a globally-focused IP firm such as AGIP would want to be aligned with a global professional services company such as Wolters Kluwer as a valued publishing partner. Charles explains how it was a collaboration that started years ago. He adds: “It has helped to have an ally with which we could promote our new offices and presence in different countries”. He has been working with Wolters Kluwer for some 10 years now, a collaboration he says he enjoys and respects immensely.

The ‘IP Firm of the Future’

Charles is passionate about what he calles “the IP firm of the future”. When asked what he means by that, he states, “I think it refers to how IP firms should start thinking regarding, especially, new technology”. With his strong IT background, it’s no surprise that Charles has been at the vanguard of keeping abreast of issues emerging tech trends such as artificial intelligence (AI) and machine learning (ML).

He also knows that these emerging technologies are set to be highly disruptive to the IP industry worldwide. That’s why he lead a project on how to include AI considerations in AGIP’s own research and work as an IP firm. For example, any client can check their status with the firm at any time in real time. In fact, AGIP was the first to accomplish that for clients almost 10 years ago, even before Western firms were starting to do that for their clients.

There are many ways in which AI, ML and other technologies are going to alter IP as it has traditionally functioned. For example, the research and fact-finding work done today by paralegals will soon be done by AI. It will be done more quickly and more efficiently and in a matter of minutes rather than hours or even days. AI means far greater accuracy with near-perfect results and that alone is an enormous game-changer in the IP world.

Charles often attends international IP fora and he senses that many IP companies are, to be very frank, “quite scared” and that “they’re even holding back”. He believes that many IP firms and specialists are simply “sitting back and waiting” to see where this paradigm shift to the IP industry eventually settles due to these emerging and disruptive technologies.

Charles was frank when asked if this lag by the IP industry regarding these emerging technologies was of concern to him: “Yes, it does concern me…a lot” was his simple response. Once again, thanks to his strong IT background, that which is downright scary to many in the IP industry is nothing more than an exciting challenge going forward for Charles Shaban.

Positive Trends in the Middle East

This year, the governments of both the UAE and Saudi Arabia decided to reduce their IP fees. This should lead to more registrations, which should be pleasing to many clients wishing to protect their IP in the region.

Charles acknowledges that enforcement and the protection of brands still needs development in Middle East. Courts and judicial systems in the region do not usually have experience or expertise in IP. Real enforcement with strict fines imposed remains spotty and problematic.

But there are very encouraging signs. For example, places such as Dubai were once meccas for counterfeit goods are far less so now. The selling of fake goods does continue but has improved a lot, especially in the UAE. Laws have changed within countries like the UAE, including stiffer fines and longer prison time for counterfeiters.

And the Future of IP in the Middle East?

As expected, Charles cites emerging technologies and adaptation thereto as a definite challenge in the next five years or so. Even trademark owners are going to feel the changes in the IP field, including protection mechanisms.

However, Charles remains optimistic, even bullish, regarding the future of IP in the Middle East. IP enforcement has improved and the rules are becoming more business-friendly. It bodes well for the region’s reputation regarding IP rights. And that is why he believes that the Middle East should be considered a “fast-maturing” IP region. 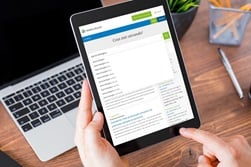