What are the different types of business mergers

A merger is a combination of two or more business entities in which the assets and liabilities of all the entities are transferred to one, which continues in existence, while all the others cease to exist. Inventory, equipment, stock, and fixtures are tangible assets that may be transferred while intangible assets may be goodwill, the name or patents.

Because it is a statutory transaction the requirements of the business entity laws of the parties’ states of formation must be followed for the merger to become legally effective.

There are four types of mergers that you are likely to encounter: general mergers, parent-subsidiary mergers, triangular mergers and multi-entity mergers. 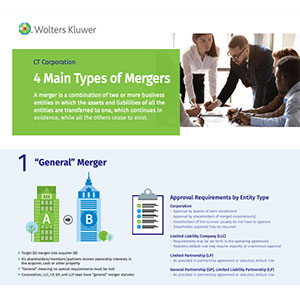 Four Main Types of Mergers
Regardless of type, each merger has unique elements and challenges.
Download the infographic

In a merger, the target entity merges into the acquiring party in a deal effectuated under the general merger statutes. This merger type is general in the sense that it is not specific and can potentially apply to all mergers.

Any merger can be effectuated under the general merger statutes, even where specific or specialty types of mergers may apply. Interest holders in the non-surviving entity usually retain interests in the surviving entity.

General Partnership (GP), Limited Liability Partnership (LP)
(and other entities that may be involved in the merger)

Parent-subsidiary mergers are the most frequently used type of specialty merger. Once statutory conditions are met, a shortened process or short-form procedure can be used.

In order to simplify the procedure when there are no, or almost no minority shareholders, business corporation statutes authorize what is called a short-form merger. In general, only mergers where a parent corporation owns at least 90% of each class of voting stock of a subsidiary corporation may be effected using the short-form procedure. Only a few statutes provide for short-form mergers involving unincorporated entities.

A parent-subsidiary downstream merger is a merger of a parent into its subsidiary. The subsidiary survives and the parent disappears. Some corporation statutes provide that where the parent owns at least 90% of the voting stock of the subsidiary, the subsidiary’s board of directors is not required to approve the plan of merger.

However, when the parent disappears, approval of the merger by the parent’s shareholders will be required.

Any of the above mergers — general, parent-subsidiary, and triangular — may involve more than one entity type.

Our team will be focused on the specific issues you face with a special emphasis on deals and funds, so you can conduct your business with confidence.
Product Details
Expert Insights
Stay informed
Subscribe to CT Corporation's newsletters for business compliance updates and legislative news.
Sign up
Additional information
Contact CT Corporation
Access resources
View events