As more healthcare workers are required to get a flu vaccine, nurses debate whether the mandates make sense.

As hospitals strive to control the spread of contagious diseases to patients who are already immune-compromised, many facilities have adopted mandatory flu vaccinations for all clinical patient care staff as a condition of continued employment. Since 1984, the Centers for Disease Control and Prevention (CDC) have recommended that all U.S. healthcare workers be annually immunized against influenza. 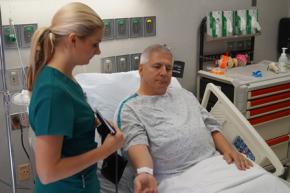 Even with the CDC recommendations, hospitals have had traditionally low vaccination rates among patient care staff. In 2008, the vaccination rate of healthcare workers was less than 46%. Studies show that the mandatory vaccination policies boost that rate to 90% or more. But, is making the flu shot a condition of employment the best way to protect workers and patients?

Most nurses are acutely aware that influenza is a serious disease. The flu can lead to hospitalization and even death – especially among the very young, the very old and those with chronic health conditions like asthma, heart disease and diabetes. Nurses can spread the flu to their patients 24 hours before they feel any flu symptoms. Even young and healthy nurses can still experience serious flu complications. From 2013 to2014, the number of flu-related hospitalizations among young and middle-aged patients rose dramatically. So, why do some nurses still reject the idea of getting a flu vaccine each year?

Nurses want to make their own decisions about their own health. The nursing care model emphasizes educating and encouraging patients to make their own informed healthcare decisions, and many nurses want that same autonomy for themselves. In a statement explaining why it does not support mandatory vaccination, The American Nurses Association (ANA( said that we “need to protect the rights of nurses to ensure that they are treated fairly and have the necessary workplace protections”.

Some nurses question the effectiveness of a vaccine that needs to be retooled each year, does not claim to immunize against all flu strains, and is only successful in preventing the flu in about two-thirds of those immunized. Others say that getting the flu shot is like wearing a seatbelt – it won’t prevent death in every car crash, but that doesn’t mean it isn’t a good idea.

Healthcare workers are not “immune” to the fairly common statements below. Even though medical experts denounce these statements as myths, the perception of truth persists.

Instead of mandating the flu vaccine, or in addition to it, hospitals can better prevent the spread of the flu virus to patients by allowing nurses who are experiencing flu-like symptoms to stay home. The problem for some nurses is that they feel compelled to come to work anyway because they fear the repercussions of calling out sick. They may not have enough sick time left, or there may be a rule against calling out sick too often during a certain time period. These types of sick leave policies can put patients and staff at risk.

Do you think flu vaccinations should be required for healthcare workers? What else can healthcare facilities do to protect patients and staff from the spread of influenza? Add your voice to the debate in the comments below.