How this Firecracker scored a 269 on USMLE Step 1

The author of this blog post is a medical student at UC-San Diego who developed a steady study routine and stuck with it en route to a stupendous Step 1 score. While Firecracker members report phenomenal board scores all the time, one of the greatest benefits of our platform is the fact that it will help you save time and energy.

In her own words, this student eloquently describes her experience of using Firecracker to parallel medical school coursework and simultaneously prepare for Step 1 here:

”I started using Firecracker during the micro block at the tail end of MS1. I had previously been making my own flashcards using other apps, but loved that Firecracker resources were not only pre-made (saving me hours each week of flashcard making that I felt were low yield as far as long-term retention), boards focused, and accurate, but also extremely comprehensive. The substantial level of breadth and depth offered by Firecracker allowed me to learn material not covered by my courses or clearly delineated by first aid, which I otherwise might not have encountered until studying from UWorld during my dedicated study. This level of detail not only allowed me to pass my classes but to excel, while not putting in substantially more study time than I did while using other study modalities. 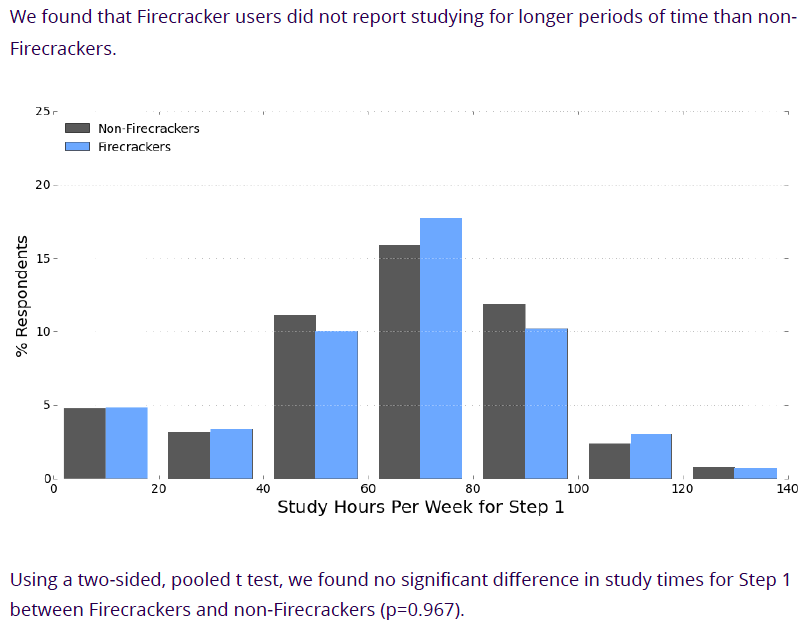 By the end of MS1, we had started to move into blocks that were going to be very relevant for Step 1 and that weren’t going to be covered again during MS2 (micro, heme, immuno, etc), so I was looking to start using study modalities that were more board-focused and focused on long term retention.

I wanted to ace my classes (which are pass/fail, but I felt were both good practice for taking standardized tests and valuable for accessing my ongoing understanding of the material) and ultimately do great on Step 1. Further secondary goals included broadening my knowledge base for small groups and for when I was pimped by attendings in the OR or the clinic while doing pre-clinical electives and research.

My medical school does organ systems classes for the first two years, where MS1 is normal anatomy, histology, physiology, etc, and MS2 is diseases and pathophys of that system. During MS2, I would flag the MS2 material for that organ system as ‘urgent’ and all the MS1 material as ‘current.’ This allowed me to review MS1 concepts while still focusing on higher yield MS2 material and having a manageable number of cards to do each day. During early MS2, I was doing ~200 cards per day.

I started seriously preparing for Step 1 in winter of MS2. I spent my winter break doing some cards everyday of MS1 material that wouldn’t be reviewed during my MS2 organ blocks, and once I moved into winter term of MS2, I increased my daily cards to ~300 per day (in addition to doing a comprehensive review of other Step 1 prep materials). Once I got into dedicated study, I flagged everything as ‘past’ and would gradually flag things as ‘current’ and ‘urgent’ that I noticed myself struggling with during UWorld blocks for regular review. For new Firecracker members: “Use it every day, and set reasonable expectations. Give it time to work. I was skeptical that I could learn facts by just seeing them once a day (although you can see them multiple times with the snooze feature, it’s not part of the default algorithm), but found that by seeing a fact every day while I was struggling it many of these facts were actually better committed to long term memory than when I was effectively cramming them by seeing a question 20x a day until I got it right. I would see a flashcard day after day and feel like I would never learn it, but then all of a sudden see it and know. You can use Firecracker to cram if you so desire, and I definitely had weekends for some classes in which I was doing hundreds and hundreds of flashcards to catch up before a test, but it was most effective when I started studying with it early and consistently.”

Firecracker members’ experiences help us to understand how we can most effectively help our future physicians and other health professionals. We will be releasing our annual survey as well soon, and you’ll reap a great reward just for participating.