Active shooters: Is your organization prepared?

While nurses and other health care professionals are used to treating victims of catastrophic events, they might not be prepared to be involved in one themselves. In the rare instance that they find themselves in an active shooter situation, advance preparations and training are essential.

Active shooter events — defined by the FBI as an incident where a person attempts to kill people in a populated, public place — are on the rise across the country, and hospitals are not exempt.

Although these incidents occur mostly in public places, at businesses, and in schools, they can happen anywhere, at any time – including in a healthcare facility. They strike suddenly, without warning, and people are usually stunned into inaction. Being mentally prepared will help nurses take action immediately and could save your own lives, along with those of others. 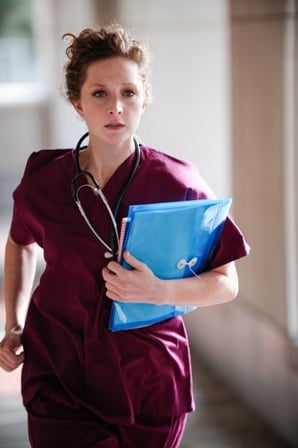 An active shooter incident is defined as a situation in which the attacker is “actively engaged in killing or attempting to kill people in a confined and populated area.” The gunman does not come to the area with the intent to commit any other crime. Most often the incident is over within 10-15 minutes, even before law enforcement arrives, which is why it is essential to know how to react.

Chaos, noise, and panic usually characterize the scene. Even those who have been trained will experience the typical human reaction to fear and anxiety, often combined with disbelief and denial. Many of those who have suffered active shooter incidents say afterward that they didn’t know what to do or that they were just waiting to take the next bullet. Knowing how to react provides the mental preparation needed to gain self-control, recall some of what was learned, and proceed to action. A single individual taking the lead can contribute significantly to everyone's chances of survival.

Injured people can be attended to once it is safe. Bear in mind that once the shooter is incapacitated or arrested, the location is a crime scene and nothing should be moved or touched except in relation to helping the injured. After initial treatment, casualties are usually moved to a central assembly point where a mass casualty plan will be implemented.

Every healthcare facility is required to have an emergency action plan, and most conduct training exercises to prepare staff for emergency situations. These exercises are often limited to evacuation drills in the case of fire or bomb threats. The current reality, however, also calls for activities to prepare staff on what to expect and how to react in an active shooter situation. ‘

Contact your local police department to provide staff with active shooter preparedness training and check out these additional resources below: