Por:Henner Hinze
“Look out, robots, because we’re brave, we are hungry for action, and we’re strapped in for success. And we have no idea what we’re doing.” – The Mitchells vs. the Machines (Sony Pictures Animation, 2021)

In recent years, the predictive accuracy of Artificial Intelligence (AI) technologies has tremendously increased due to the advent of powerful algorithms like neural networks with millions of automatically learned parameters. However, this has come at a cost – in comparison to “classical” approaches like rule-based systems and linear regression this novel approaches, due to their inherent complexity, are significantly less transparent and harder to interpret. Hence, they are considered “black box” systems. Depending on the domain, circumstances and stakeholders involved, this lack of explainability limits their usefulness in quite a few practical applications. This is a recognized but still unsolved problem in many respects, investigated under the term eXplainable AI or XAI.

Limiting the discussion around XAI to a technological exercise or for the sole purpose of legal compliance and trust-building would miss its larger potential. When XAI is considered an integral part of AiX design (see ‘The Need for AiX Design’, Hinze, 2021), it presents an opportunity to set AI on a path to not only become explainable but informative – even educational – to its users.

Imagine working in a forensic lab – much like the ones seen on TV procedurals like “CSI”. The police have provided a blurry image from a surveillance camera revealing a perpetrator’s face. 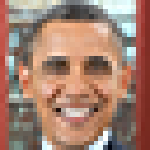 The task is now to improve the quality of the image so it can be matched with the police database. The infamous fictional tool for the job is called ‘Zoom-and-Enhance’. In principle, it should not be possible to upscale the image this way as this would require creating information that is not present in the original material. But modern machine learning techniques allow us to tackle this problem anyway. Using Face Depixelizer the pixelated image could be upscaled to obtain a high-resolution image that looks very plausible. The task seems fulfilled.
Image source: Wikipedia (scaled by the author) 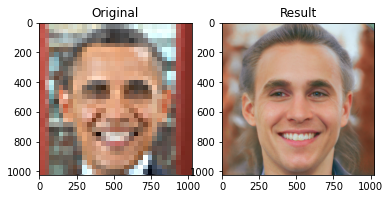 Created with Face Depixelizer by the author

But hold on! The original image clearly shows former U.S. President Barack Obama. So, what is happening here? The model used for the transformation has been trained on pairs of pixelated images and their corresponding high-resolution versions. The AI does not truly scale the original pixelated image. It reconstructs a new image from a combination of the high-resolution images it has seen during training whose pixelated counterparts are most similar to ours. This is a useful tool for artistic purposes but utterly inappropriate for the forensic use case. without understanding the implications of the underlying mechanism some random innocent person would have been prosecuted.

This example is fictional, but AI comprehensibility has real-life consequences (See some examples in Weapons of Math Destruction by Cathy O’Neil; The example above is inspired by Boris Müller, 2021).

Proof of performance is not enough

One could make the argument that AI does not need to be comprehensible to be trustworthy if it can be proven to perform accurately. Cassie Kozyrkov, Chief Decision Scientist at Google, makes exactly this argument in ‘Explainable AI won’t deliver. Here’s why.’ (Kozyrkov C, 2018).

For a satirical outlook on the possible consequences of this stance, the author recommends his short story ‘Reply Hazy. Try Again.‘ But in all seriousness, there are flaws in this argumentation. While performance is a crucial element in trust-building (Lee & Moray, 1992), it is not the only relevant factor.

Kozyrkov uses an analogy asking which of two spaceships we would trust to use, the one that is theoretically sound but has not been flown yet (well understood but untested) or the one that has proven to perform safely in years of successful flights (poorly understood but well tested). She prefers the latter. This analogy begs two questions:

There are a few reasons why testing the performance of an AI system may not be enough on its own to trust it:

Ribeiro et al. (2016) describe an experiment in which a model is trained to distinguish huskies (Eskimo dogs) and wolves with high accuracy. Curiously, the researchers can show that the model ignored color, pose, or other attributes of the animal itself but made its prediction based on the presence of snow in the background. This model would barely be usable in practice. 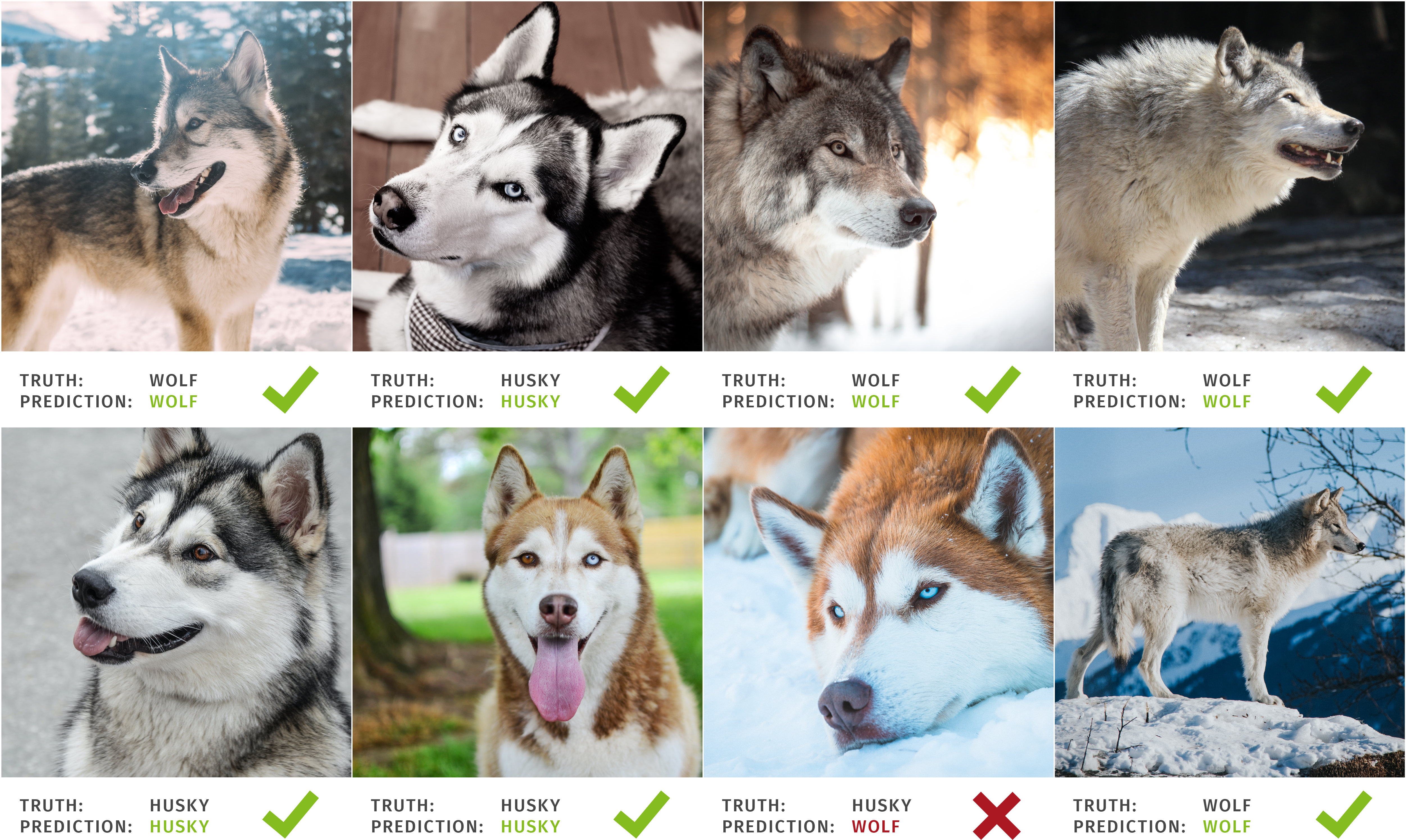 Caruana et al. (2015) trained a model to predict the probability of death by pneumonia to decide whether to hospitalize patients. On inspection, they found that the model, counter-intuitively, predicted patients with a precondition of asthma to have a lowered risk of dying. This is explained by the fact that doctors typically not only hospitalize those patients but admit them directly to the intensive care unit. The aggressive care administered lowers the risk of pneumonia patients with a history of asthma below average compared to the general population. The effect of following the model’s prediction without understanding this mechanism would keep patients with preconditions from being hospitalized subjecting them to an unacceptable risk.

Kozyrkov still clearly makes some valid points in her article – e.g., there are limits to human comprehension. We invented complex algorithms to solve complex problems – problems too complex to be solved by simple means. Humans are neither capable to visualize high numbers of dimensions nor to grasp highly non-linear relationships, which are both characteristics of typical “AI problems”. This means that explanations must necessarily simplify. Kozyrkov points out that while we cannot inspect the workings of every neuron in a human’s brain, we still trust other people. However, humans are not completely black boxes. They consistently produce useful explanations for their ways of thinking and their behavior.

There seems to be a consensus that there exists a general trade-off between the accuracy of a model and its comprehensibility: the better a model is at predicting the less understandable – both due to its higher complexity – it becomes for humans and vice versa. One might conclude that the higher the stakes the more accurate a prediction is needed, and thus unexplainable predictions will be unavoidable. This seems a dilemma as for high-stakes decisions one also wants to deeply understand all factors playing into them.

This needs clarification and a reframing of perspective: The only thing any machine learning algorithm is capable of is making predictions. Even generating a sentence technically means to predict the next word based on the previous ones. Classification is a prediction of what label would be assigned by a human annotator, etc. But even highly accurate predictions are rarely useful by themselves. They need to inform decisions to implement actions. Decisions are based on predictions but apply context and evaluation of consequences and their probabilities. Otherwise, one would have to assume that every two decision-makers would come to the same decision given the same prediction, which is clearly not true. To help decision making AI systems must supply the context of their predictions. Comprehensible AI gives this context.

That does not mean complete transparency should be preferred over prediction accuracy in all cases. But starting from an ultimate user goal and its prerequisites will help to make an educated estimate on what needs to be explained and how accurate predictions must be. Instead of thinking in binaries as “black box” vs. “white box” (aka “glass box”), the aim should be for “grey boxes” (Broniatowski, 2021) that allow for the right balance between comprehensibility and prediction accuracy.

In any case, comprehensibility must not be an afterthought – after all technological decisions have been made – but must be an integral part of product concepts and design in close collaboration with the end-users of an AI system.

Henner Hinze is a Principal User Experience Engineer with */dxg. He has a background in design and computer science and focuses on the design and development of AI-enabled products.

Special thanks to Greg Merkle, Dawn Mueller, the knowAI and the */dxg communications team for their valuable input.

Explore tópicos relacionados
Inteligência artificialInovaçãoMachine Learning
Innovation Insights
Together with our subject matter experts we formulate big ideas and insightful points of view on issues that impact you and your organization. Get ready to be inspired!
Explore
Back To Top