The efficacy of colorectal cancer (CRC) screening is dependent on participation and subsequent adherence to surveillance. The internet is increasingly used for health information and important to support decision-making. We evaluated the accuracy, quality, and readability of online information on CRC screening and surveillance.

Twenty websites were included. The mean Website Accuracy Score was 26 out of 44 (range 9-41). Websites with the highest scores were cancer.org, bowelcanceraustralia.org and uptodate.com.

There is marked variation in quality and readability of websites on CRC screening. Most websites do not address polyp surveillance. The poor correlation between quality and Google ranking suggests that screenees will miss out on high-quality websites using standard search strategies.

Medical students’ use of information resources: Is the digital age dawning?

Investigators at the University of Iowa monitored the use of UpToDate by second year students as they transitioned to their clinical years. Students rapidly adopted UpToDate. By the end of their third year:

The reading habits of medicine clerks at one medical school: frequency, usefulness, and difficulties.

Among medical students at Johns Hopkins, UpToDate was the most commonly used reading source and was rated as the most useful.

Speed, accuracy, and confidence in Google, Ovid, PubMed, and UpToDate: results of a randomised trial.

Utility of the electronic information resource UpToDate for clinical decision-making at bedside rounds.

The Journal of the Medical Library Association (JMLA) recently published, and released to the general public, a study conducted by the A. T. Still University of Health on a side-by-side comparison of UpToDate and ClinicalKey. The survey study was completed by 23 faculty members and 292 students from two osteopathic schools of medicine and a physician assistant program.

The value of library and information services in patient care: results of a multisite study

A large-scale, multi-site study on the value and impact of library and information services on patient care was conducted by the National Network of Libraries of Medicine, MidAtlantic region and researchers at the University of North Carolina at Chapel Hill. The respondents were 16,122 clinicians at 56 library sites serving 118 hospitals in urban and rural areas.

Survey respondents were asked to report on a recent incident in which they had sought information for patient care. The study found: 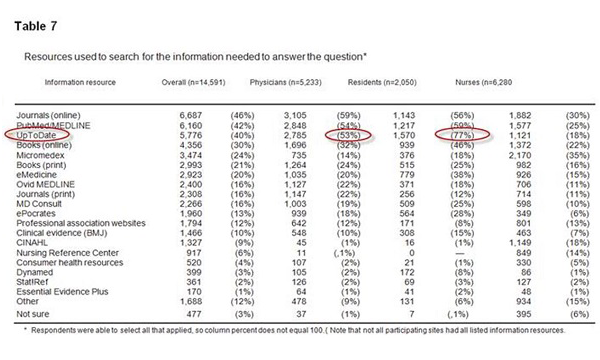 Used with permission from the Medical Library Association

A study of generalist physicians in Iowa investigated the obstacles preventing physicians from answering their patient care questions. Physicians asked 5.5 questions per half-day but pursued answers to just 55% of them. Of the 55% of questions pursued, UpToDate was used the most (41%) out of over 10 information resources consulted during the study. Other resources on the list included Epocrates (25%), MICROMEDEX (15%), and the Sanford Guide to Antimicrobial Therapy (14%).